Falling Action: Best and Worst of the Weekend That Was in MMA 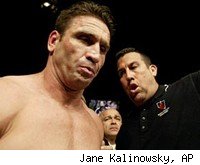 I should have known it was going to be a rough night. Not more than a few minutes into the Impact FC broadcast, ring announcer James White made the first and most obvious of several noticeable blunders, drawing a blank in the middle of his opening address.

It got a laugh and few jeers from the Australian audience, but it was also a sign of things to come for the pay-per-view broadcast. White, like Impact FC itself, served as a useful reminder that this MMA promotion stuff is harder than it looks.

There are two ways of looking at this: 1) Impact FC is still pretty new at broadcasting MMA events, and whatever gives fans more fights to watch and fighters more chances to get paid is always a good thing, or 2) What makes these jokers think they deserve $30 for a show that looks like something you'd see on late-night public access TV?

Personally, I'm conflicted. The fights themselves were decent, though certainly not pay-per-view quality. It's also hard to feel like you got your money's worth when two fights end with guys quitting rather suddenly, but the promoters don't have any control over that.

What they do have control over are things like production quality (poor), the announcers (James White makes Bruce Buffer look like the greatest genius mankind has ever known), and camera work (at times Impact FC managed to show every angle but the one that would have helped us understand what was happening in the fight).

I don't mean to beat up on the Aussies here. They tried. They really did. But when you ask people to pay for the privilege of spending a Saturday night watching you learn on the fly, trying alone doesn't cut it.

Now, on to the fights and the fighters:

Biggest Winner: Pedro Rizzo
No, he didn't have the toughest of opponents, even if it was a main event bout, but Rizzo did exactly what he needed to do. His leg kicks looked as brutal as ever, and Ken Shamrock only needed to take a couple before he was ready to take a knee and call it a night. It's not going to vault him back into the big time, but it's a decent showing on the MMA seniors tour.

Biggest Loser: Ken Shamrock
When he said he was going to keep getting beat up for as long as fans wanted to see him, I was really hoping that the crowd in Sydney would respectfully let him know that his services are no longer necessary. Instead they cheered, and that's only going to encourage him. Shamrock is an MMA pioneer, but he's got no business in the cage these days. He's 46 years old and he hasn't beaten anyone even close to credible since 2004. He's a living cliché at this point. The worst part is, he seems to know that, and he still doesn't seem to care.

Most Meaningful Victory: Murilo "Ninja" Rua
The lesser known Rua brother survived an early knockdown to notch a first-round submission victory over Jeremy May. He showed his toughness, his resiliency, and his willingness to mix it up and put on a show. More importantly, he didn't screw up in any noticeable way, nor did he face a complete pushover, which is almost all it takes to get the nod in this category after this weekend's action.

Least Meaningful Victory: Jesse Taylor
For some reason "JT Money" and his cornermen cavorted around the cage as if beating a 43 year-old Murilo Bustamante via verbal submission due to dizziness was the accomplishment of a lifetime. A win is a win, I suppose, but you should at least pretend to be gracious when it's unclear whether anything you actually did played a role in your opponent's decision to quit.

Most Likely to Get Back in the Big Leagues: Paul Daley
His bridges may be burned with the UFC, but Daley's win over Daniel Acacio showed that he can still hang at a high level. Strikeforce may want to wait and let his sucker punch infamy fade from people's memories, but there's got to be a place for the Brit somewhere.

Best Job Meeting Already Low Expectations: Paulo Filho
He showed up on time, didn't do anything bizarre, and put on a pretty decent performance. I scored the bout in Denis Kang's favor, though it was close enough that a draw isn't a miscarriage of justice. Filho didn't do anything too spectacular, but at this point he doesn't really have to. For him, at least right now, success consists of the absence of failure. By that metric, it was a good weekend for him.