Daniel 'Ninja' Roberts Has His Mind Off the Money 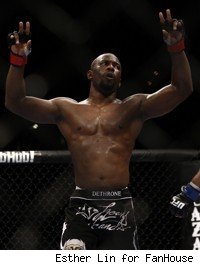 A fighter's homework involves studying his opponent and training to the best of his or her ability in order to implement a gameplan to win. Prior to his UFC 116 fight earlier this month, welterweight Daniel "Ninja" Roberts did a little more than the usual homework.

He did his math.

As any fighter on the preliminary bouts knows, the real money is in the post-fight bonuses. Roberts, whose fight purse was $6,000 to show and $6,000 to win, was looking at a $75,000 bonus if he walked home with the Submission of the Night.

So Roberts made it his goal his to take opponent Forrest Petz down and win by submission. But Petz proved harder to finish than Roberts had originally thought and Roberts would have to settle with a split decision. While he was glad to pick up his first UFC win, he was disappointed with his overall performance.


Share
"I'm definitely happy to win, but the last fight, that definitely wasn't me," Roberts said. "That's not how I normally fight. I was focused on that bonus and I'm really upset that I did that. I'm a lot better fighter than what I showed."

When Roberts first signed with the UFC last February as a late replacement against John Howard, he had just started training with the Cesar Gracie camp in California. Moving from Tulsa, Okla. to San Francisco, one of the adjustments he had to get used to was the higher cost of living.

Despite the specific intention of making bonus money, Roberts, whose been a full-time fighter for a year now, says he wasn't in financial pressure going into the fight.

But, like most people, a little extra money never hurts.

"I definitely could have used the money, cause I mean, where I live in San Francisco is one of the most expensive places in the world to live," he said. "It's all good, I'm doing fine. This is a huge lesson for me."

Not that he would have won the Submission of the Night, which went to Brock Lesnar for his amazing comeback win by arm-triangle over Shane Carwin.

To his credit, part of the reason why he moved away from his usual energetic style was the knockout loss to Howard in March. An aggressive Roberts was beating Howard in the early minutes until a straight left spoiled Roberts' UFC debut.

Now 1-1 in the UFC with the win over Petz, Roberts is targeting a mid-September return as he recovers from a couple of injuries. When he does, he'll look to bring back his "destroy mode," because for Roberts, UFC 116 will be a reminder that there's more than one way to win a fight.

"My main goal from now is to destroy my opponents as fast as possible," Roberts said. "I'll take a submission. I'll take a knockout. Any kind of way."