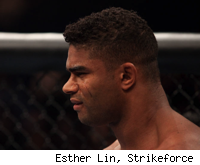 During a conversation with Ariel Helwani on Monday's episode of "The MMA Hour," Alistair Overeem did his best to clear up the confusion surrounding his decision not to participate in a bout against Ricco Rodriguez at Dream.15.

To hear Overeem tell it, it wasn't simply a case of him not wanting to take the risk, as Rodriguez suggested. Instead, miscommunication about whether the scrap would be a title fight was mostly to blame, he said. That, combined with fatigue from a busy year for the Strikeforce heavyweight champ and some flagging motivation at the thought of facing an unranked opponent with no hardware at stake, prompted him to pull out of the fight well in advance.

Share "I did eight fights in eight months," Overeem said. "There's a max, you know. So I needed to take time off and let my body recover, and what happened was, I'd just got back from the states and my management already told me, 'Yeah, you have a fight coming up in Dream.15, they want you.' I told them, I'm tired. I need a holiday. The only reason for me to recharge and go back into training camp is if it's for the title. That's an opportunity I don't want to go to waste.

"A couple days later my management confirmed the fight, it was going to be for the title, against Andrei Arlovski. Well, what happened then was I was totally motivated, got my team back together, my sparring partners, got back into camp, and then after two week I heard that Andrei Arlovski is injured, he's not fighting."

Overeem said a number of replacement fighters were mentioned, including former UFC heavyweight champ Tim Sylvia, and he was assured that the fight would still be for a title.

"I asked on several occasions, is this for the title and is it confirmed? My management said yes, it's for the title and it's confirmed. So I kept training. Two and a half weeks into training...my management called me and told it's going to be Ricco Rodriguez and it will not be for the title. Then my motivation just totally was lost. I could still make it to see the Fedor fight, so I said, yeah, I'm going to go to the states and I'm going to challenge Fedor, the winner of the fight between Fedor and Fabricio Werdum. I cancelled the fight then and there."

Only several weeks later did he learn that Dream was still promoting his appearance as part of the event, and that Rodriguez had already left for Japan under the assumption that he'd be facing Overeem at Dream.15.

"I was like, wait a minute, I cancelled the fight," Overeem said. "Let's put out a press release so that everybody knows I'm not fighting. For the fans, for Ricco, for anybody that shows up, I'm not going to be there. ...It's the proper thing to do, I think."

Overeem also said that he's "undecided" about where his next fight will take place, but hinted that he may be interested in returning to K-1 this fall.

"You also have the K-1 Final Grand Prix at the end of the year. ...I have qualified for the final 16. I'm not entirely sure if I'm going to compete, but I would like to compete. K-1 is striking, I like it, it has a little bit different audience. It's very popular in Holland. So yeah, I want to become champion. I see myself as champion."

Overeem reiterated that he's not sure if K-1 will take precedence over his MMA career, but said his dream is to become a K-1 champion as well as an MMA champ.

"That would be legendary. No other fighter has ever done that."