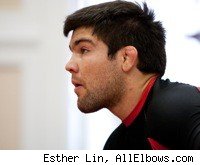 Drysdale, who entered the bout with a 1-0 amateur record, submitted Bas Huveneers via arm triangle at 1:12 in round 1.

The 2007 Abu Dhabi Combat Club Submission Wrestling World Championship's open division winner told MMA Fighting last week that he has a four-fight deal with AFC. He expects to fight for the Canadian-based organization one more time this year before finishing his contract in the first half of 2011. He then hopes to sign a deal with either Strikeforce or the UFC.

Below are the full results from AFC 3: Evolution, including former UFC fighter Kalib Starnes middleweight title win, courtesy of TopMMANews.com.