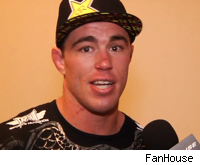 UFC President Dana White told MMA Fighting on Friday that Jake Shields has yet to officially sign with the UFC, but that doesn't mean plans for Shields' debut with the company aren't moving forward.

So confident is the company that Shields will soon be in the fold that his first opponent has apparently been selected. Two sources close to the situation have told MMA Fighting that Shields will likely make his first foray into the octagon against welterweight contender Martin Kampmann.

Barring any unforeseen setbacks, Shields' signing is expected to be finalized in the next several days as the UFC moves to populate upcoming events.

Share No date was given for his debut, but October's UFC 121, which takes place in Shields' home state of California, seems a likely possibility.

The 31-year-old Shields, who is in the midst of a 14-fight win streak, has captured titles at both the 170- and 185-pound weight classes, but it appears he's settled on welterweight as his future UFC home.

Shields (25-4-1) fought each of his last two fights as a middleweight, and in his last bout, upset Dan Henderson to retain the Strikeforce middleweight title. The win, however, marked the last fight on his deal, and he rapidly became the most coveted free agent on White's wish list.

Earlier this month, Strikeforce officially cut ties with Shields, releasing him from his deal before a matching period lapsed, and stripping him of the belt. Talks with the UFC have progressed swiftly, and according to one source, the deal is nearing finalization.

Kampmann is considered a top UFC welterweight, having gone 4-1 in the division with only a loss to Paul Daley. Known for a polished all-around game, Kampmann boasts a 17-3 lifetime record. In his most recent fight, at UFC 115, he earned a unanimous decision against Paulo Thiago.

Even when he fought for EliteXC and then Strikeforce, Shields voiced a hope to fight UFC welterweight champ Georges St. Pierre, but it appears he's going to have to win at least one fight to get the match he's wanted for years.