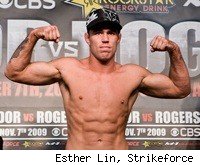 "Jake's opponent is one of the UFC's top contenders and will be announced shortly," GracieFighter.com stated.

According to SI's Josh Gross, the contract isn't finalized, but the money is agreed to. Gross expects the signing to become official most likely next week.

Shields will move down to the division where he spent the majority of his career, 170 pounds.

Share Even before the last fight on his Strikeforce contract, it was only time before Shields would join the UFC. Just one week after the Henderson win, Shields was on camera sitting next to White at the WEC 48 pay-per-view in Sacramento. At the end of June it became all but official after Strikeforce took the initiative to release Shields from his contract during their renegotiation period.

"He wants to be in the UFC, we want him in the UFC, unless something crazy happens in contract negotiations, which I don't anticipate, he should be fighting in the UFC," White told MMAFighting.com's Ariel Helwani the day after Shields received his Strikeforce release.

The 31-year-old Shields, who holds an overall MMA record of 25 wins, four losses and one draw, is considered one of the top 170 and 185-pounders in the world. Shields has won his last 14 fights, including wins over Dan Henderson, Jason "Mayhem" MIller, Robbie Lawler, Paul Daley as well as current UFC fighters Carlos Condit and Yushin Okami.