DREAM and K-1 promoter FEG announced Friday that it is entering a partnership with Shanghai-based investment bank PUJI Capital that could be worth 20 billion yen ($230 million).

K-1 President Sadaharu Tanikawa stressed that FEG had not been sold and in fact it will now be setting its sights much higher.

"This is a declaration of war against the WWE and UFC. From Asia, we will take the world," Tanikawa stated.

Tanikawa admitted that expansion to American soil would be futile at this stage and under the watchful eye of K-1 creator Kazuyoshi Ishii, they will set their sights on the rest of the world.

"Mr. Ishii is completely supporting us. We won't stand a chance in the American market so we will spread to the rest of the world."


Share
Tanikawa stated that changes should start from 2011 and that Japanese events will continue with K-1 on Fuji TV and DREAM and K-1 MAX on TBS. PUJI will not be involved with the day to day operations regarding the actual promotions but will instead be in charge of fund raising and leading the global expansion. and have forecast that they will gather 20 billion yen ($230 million).

A call for a drastic change in Japanese MMA has been needed since the collapse of PRIDE, even Tanikawa admitted himself.

"When K-1 and PRIDE were competing against each other, 80% of the martial arts market was in Japan. It is now the opposite and Japan is only 20%. We were worried that Japan would be left behind if we let this continue, it is unacceptable. We needed to change our business model."

"We've let Dana White get a lead on us. Before (Shinya) Aoki beats (Gilbert) Melendez, we must win as promoters."

DREAM EP Keiichi Sasahara, FEG's Korean representative and PUJI representative Michael Chen outlined the plan for global expansion but predictably sights are set firmly on Asia initially with Europe to follow with the US market described as too developed and not lucrative. 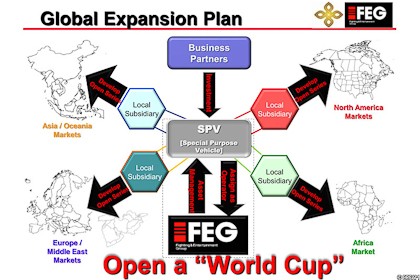 Sasahara hinted at a large change to come in an exclusive interview with MMAFighting.com back in May.

MMAFighting.com: Because of these recent high profile losses and the trouble with sponsors, there is a lot of negativity towards Japanese MMA right now. What are some things that we can look forward to?

Sasahara: To fight abroad is up to the fighter. If they want to go abroad then I will be happy to send them off. Their record is just a number. It is just a sheet of paper.

I am promoter and essentially this is a marketing company. At the moment the UFC is successful with marketing but I am not looking at them with envy. I am working on ways to compete with them right now. I am working to make things better. One day, in maybe two or so years, I will be happy if you, or the people reading your article can say "Oh, Sasahara meant this two years ago."

Specifically, what are you working on?

I cannot speak about the details yet.

As you said there has been so much negativity about Japanese MMA, and actually I think a lot of it is true. I am also working on something for the summer and autumn that will bring back some new life into to Japanese MMA.