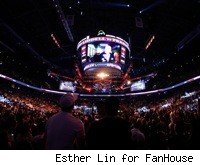 As you may recall, much of the talk surrounding UFC 115 was whether the organization would ever return to Vancouver following its first show. High insurance rates and a lack of provincial support, led many to believe that until things changed for MMA in Western Canada, the UFC (or another professional organization, for that matter) would think long and hard before holding another event at GM Place or any other arena in British Columbia.

A month later, the MMA scene in Vancouver became a little hazier, as Vancouver Athletic Commission chairman Mirko Mladenovic, a supporter of MMA, was impeached and replaced by Dave Rudberg. Why was he fired? Well, The Vancouver Sun reported that "city staff and others complained about his conduct during the recent debate over allowing an Ultimate Fighting Championship event."

Moreover, there is a growing concern among MMA supporters in Vancouver that the two-year trial period for MMA in Vancover, which began in December 2009, might expire with only one major MMA event ever taking place in the Olympic city.

No one has been covering this story better than The Score's Paul Lazenby, and MMA Fighting spoke to the fighting analyst about some of the issues surrounding MMA in Vancouver and the sport's future in Western Canada. The interview is below.

Ariel Helwani: Why was Mirko Mladenovic impeached?
Paul Lazenby: My impression is that Mirko was impeached for forcing the issue of the UFC through, and also for the fact that in spite of being a politically active person, he's not all that politically correct. To be blunt, Mirko can be very abrasive and also very prone to forcing his own ideas upon people even when he doesn't particularly know what he's doing. I will always give him credit for championing the cause of MMA in Vancouver, but the guy stepped on many toes (mine included), and I'm not surprised that he's been booted.

AH: Is the new chairman, Dave Rudberg, good or bad for MMA in Vancouver?
PL: I don't know whether Dave Rudberg is going to be good or bad for MMA, but if what Mirko has said about Rudberg being a good friend of Licensing Department Assistant Director Tom Hammel is true, then we're doomed, since Hammel was one of the primary opponents of MMA in this city during the fight to get UFC pushed through.

AH: Both Marc Ratner and Tom Wright have said that the UFC will only return to British Columbia if the sport is sanctioned provincially. Do you think that will happen any time soon?
PL: The provincial and municipal governments have been batting this issue back and forth for a long time now. I don't dispute that having a provincial commission is the way to go, but it's very frustrating to keep hearing that the province and city are each trying to pawn responsibility off on the other, resulting in the sport getting stuck in a quagmire. While we wait for the province to get its finger out of its a**, we could easily continue to run MMA events under VAC sanction as was previously (and successfully) done by World Freestyle Fighting, Elite Fighting Championships, bodogFIGHT, UFC and others.

AH: What, if any, backlash was there towards the UFC following last month's event?
PL: The only backlash following UFC 115 is that of the Vancouver fanbase against the municipal government. The event couldn't have gone better. I spoke with members of the Vancouver Police Department and they told me that there were no problems inside the arena, and nothing on the streets afterward that they wouldn't have encountered on a normal Saturday night. However, city council is grasping at straws, trying to find anything negative to justify blocking further events. Councilor Kerry Jang said of an incident of gay-bashing that happened in the general vicinity of the arena: 'There was an issue of a beating -- unrelated to UFC, but the perception was there.' In my opinion, the local government is going to continue with its old, cowardly practice of making excuses to conduct further 'evaluations' and 'risk assessments' so that they can back-burner MMA forever without ever having to actually say 'no.'

AH: When do you think the UFC will return to Vancouver?
PL: No time soon, by the look of it. Until politicians put their personal bias/arrogance aside and let the actual facts about MMA dictate their actions, I won't be holding my breath for any kind of professional mixed martial arts activity in Vancouver.