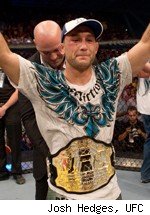 UFC champions Georges St-Pierre and Frankie Edgar came up short at the ESPYs on Wednesday night.

The annual awards ceremony held by the ESPN cable network, now in its 18th year, took place at the Nokia Theatre in Los Angeles and aired live on ESPN. The broadcast was hosted by "Saturday Night Live" performer and writer Seth Meyers. And once again, the awards show coincided with the day after the Major League Baseball All-Star Game, one of the few "dead days" of the year in major sports.

St-Pierre, the UFC's welterweight champion, was nominated for Best Fighter. Edgar was up for Best Upset for his lightweight title win over BJ Penn at UFC 112 in April.

St-Pierre, nominated in the Best Fighter category for the second time, lost again to boxer Floyd Mayweather, who won for the third time. MMA fighters became eligible for the award when the sport began a mainstream surge and "Best Fighter" replaced "Best Boxer" in 2007.

St. Pierre has fought just one time since the 2009 ESPY Awards – a unanimous decision win over Dan Hardy at UFC 111 in March. He is currently filming Season 12 of "The Ultimate Fighter," which will debut Sept. 15, opposite fellow coach Josh Koscheck.

Edgar's Best Upset hopes were trumped by the Northern Iowa men's basketball team, which won for its upset of top-ranked Kansas in the 2010 NCAA Tournament. Edgar rematches Penn at UFC 118 in Boston on Aug. 28 – where he is once again a sizable underdog despite being the title holder.

Voting for the ESPYs is done online through fan balloting.