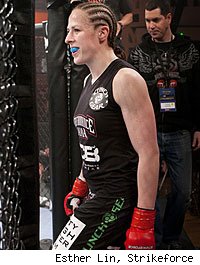 Strikeforce on Thursday made official the full fight card for its Challengers show July 23 in Everett, Wash.

Heavyweight Shane Del Rosario (9-0) puts his unbeaten record on the line against Lolohea Mahe (4-1-1) in the main event.

All nine of Del Rosario's fights have been stoppage victories and just one has gone to the second round. His last win came more than eight months ago, an omoplata victory over Brandon Cash. Mahe is coming off a loss in his Strikeforce debut in March against Lavar Johnson.

In the co-main event, Strikeforce women's bantamweight champion Sarah Kaufman (11-0) puts her title on the line against Roxanne Modafferi (15-5), who upset Tara LaRosa by split decision at Moosin's God of Martial Arts show in Massachusetts in May. It will be Kaufman's first defense of the title.

Also on the main televised card, Cory Devela (9-4), who has fought just twice in two years, meets Bobby Voelker (21-8); Mike Kyle (16-7-1), whose last loss came a year ago to Fabricio Werdum, takes on Abongo Humphrey (7-1), whose only career loss came to Brett Rogers; and Caros Fodor (5-2) makes his Strikeforce debut when he faces Thomas Diagne (1-1).

The main card of Strikeforce Challengers 9 will air live on Showtime at 11 p.m. Eastern on July 23 and takes place at the Comcast Arena at Everett, just north of Seattle.