Paul Daley's Punishment for Sucker Punch? You're Looking at It 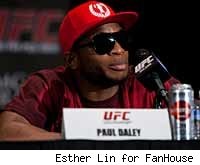 At some point this weekend, Paul Daley is going to have to look around at the company he's keeping in Australia and ask himself some tough questions.

Who knows, maybe he already has.

Maybe when he sat down for the pre-fight press conference and looked around to see himself surrounded by aging ex-champions and noted MMA misfits of every stripe, perhaps that's when it started to sink in that he had found himself in a sort of MMA purgatory.

Daley already knows why he's on the Impact FC card in Sydney this Saturday and not in the UFC. We all do. After losing a decision to Josh Koscheck at UFC 113, he threw what may have been the most notorious and yet least damaging punch in UFC history. Least damaging to the recipient, anyway.

Share Coming as it did several seconds after the bell, Daley's sucker punch succeeded in getting him immediately booted from the UFC, which is how he finds himself on this particular rogue's gallery of a fight card. Sure, there are some guys scheduled for the event who just hit a rough streak, maybe lost one or two more than they could afford to. But this many volatile, questionable characters all on one card? At some point we have to acknowledge that it's not a coincidence, but a pattern.

At the press conference this week, Daley described his own ugly incident as "a bit insignificant" now. How he managed to say that with a straight face as he prepared to fight on a card headlined by a 46 year-old Ken Shamrock, who's 1-5 in his last six fights, I'll never know.

The funny part is, back in Montreal the local commission is still in the process of deciding how to punish the British welterweight for his indiscretion. Maybe someone should send them the fight night lineup for Impact FC. When they see Daley's name between Shamrock's and Jeremy May's, they might decide that he's been punished enough.

Judging by Daley's remarks this week, he doesn't think his UFC ban is all that big of a deal. He doesn't even necessarily think it's a true ban. If he keeps winning fights and "bringing in fans," he suggested, Dana White might soften his stance and allow him back in the fold.

Sorry Paul, but I wouldn't bet on it.

Daley's exile is a punishment that perfectly fits the crime. It's far more appropriate than a fine or a suspension or any other sanction that an athletic commission might hand out. He still has the chance to fight and pick up a paycheck. He hasn't been placed on a blacklist because of one stupid mistake. That would be unfair.

And yet, he has been put on some sort of list. He's among the damaged goods now, right there with Jesse Taylor – the fighter who literally and gleefully peed his pants on national TV – and Paulo Filho – the man who is as likely to skip an event altogether as he is to show up and spend three rounds talking to ghosts that only he can see.

It's not a career death by any means, nor should it be. In a way, it's just a different kind of fame. It also might be the best way to discourage such actions in other fighters. One look at the various cautionary tales that fill out the Impact FC fight card, and suddenly they're reminded why it's important to play by the rules and conduct themselves with some measure of dignity.

If they don't, they're bound to find themselves at one of these pre-fight pressers some day, listening to the people around them trying (and failing) to downplay the extent of their own screw-ups. Then they'll have to ask themselves how they got there, and chances are they won't like the answers.