Death in the Cage: The Michael Kirkham Story 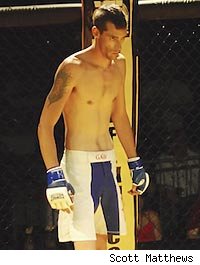 "The guy beat the heck out of the back of Michael's head to the point where it was beet red," Kirkham told FanHouse. "The other fighter was warned two or three times by the referee."

Michael Kirkham lost that amateur fight in Columbia, S.C., on April 24 via a technical knockout, a bout he lamented on Facebook should have resulted in the disqualification of his opponent. Kirkham was given an automatic 30-day medical suspension for the TKO loss, but it doesn't appear that he followed up with a doctor.

Two days after the suspension ended, Kirkham -- known to his friends here in the Carolinas as "Tree" due to his 6-foot-9, 155-pound frame -- suffered a brain hemorrhage in his pro debut at the University of South Carolina Aiken Convocation Center on June 26. He died two days later at the age of 30.


Kirkham's was the second death in U.S. history linked directly to a sanctioned MMA bout. He was checked out immediately before the fight by a ringside doctor, and an ambulance was stationed nearby. It's possible, however, that neither could have been capable of detecting or treating the damage inflicted in the previous bout.


Share
"This could have been second-impact syndrome," said Dr. Joe Estwanik, former medical advisor to the North Carolina Boxing Authority and author of "Sports Medicine for the Combat Artists." "From a few days to three-to-four weeks after somebody suffers a significant blow to the head, a second blow can trigger an overwhelming response by the body that we still don't really understand. Even a minor blow could result in massive swelling of the brain and there's up to a 50 percent chance of dying."

Dr. Robert C. Cantu, a leading researcher on second-impact syndrome, said a brain scan done after the first fight may have been able to detect a brain injury, but such tests run well north of $1,000. That was certainly out of reach for Kirkham, who owed thousands in child support and hadn't held a steady job in years.

He was slated to make about $300 for his bout with Carlos Iraburo.

The rise in popularity of UFC in recent years has spurred a boom in the number of people training in MMA, and gyms have sprouted up around the country to meet the growing demand. Kirkham caught the MMA bug while he lived here a couple years ago, going as far as creating his own fighting crew called the Fayetteville Independents.

"He was a good guy," owner Lee Tart said. "He did all kinds of stuff. He mowed grass, made sure the parking lot was clean and did some glass cleaning. Then, one day he didn't come to work. I couldn't find him."

Kirkham, who moved from Illinois to North Carolina after high school to pursue his dream of starting up a band, cobbled together jobs here and there to make ends meet. He had a running feud with his ex-wife, who remained in Illinois and was due $10,584 in back child support as of July 2007, when a judge ordered Kirkham to pay $511 per month in child support for his two children.

"I don't believe it's right that I should have to pay child support on children that I am being denied contact with," Kirkham wrote to a judge in an effort to contest the amount of child support due. "I [have] been kept from having any involvement in their lives for the past three years."

Through all the court documents obtained by FanHouse, Kirkham listed "unemployed" under occupation. Brandon Patterson, an Indianapolis-based MMA promoter who Kirkham leaned on for advice, said Kirkham didn't see MMA as a way out of his financial troubles.

"He got into it because he loved it and was good at it," Patterson said. "His financial problems had nothing to do with why he got into the sport."

Kirkham left town with his girlfriend late last year to join one of his brothers in Gaston, S.C. He kept in constant contact with members of the Independents, helping set up various amateur bouts and traveling as far as Tennessee for matches.

"He was the motivator and backbone of the Independents," Moses Avery said. "Every time we went to a fight, the Independents were considered the underdog team, but we never came home without a win."

Iraburo, Kirkham's opponent on that fateful night last month, followed a more traditional route to MMA. He began in martial arts at age 15, and at 18 started training in MMA, according to his bio. Carlos "Carlito's Way" Iraburo, who turns 28 this week, currently trains at Greubel's Mixed Martial Arts gym in Augusta, Ga.

At 5-foot-9, he gave up a full foot in height to Kirkham, although Iraburo had the more impressive amateur resume: A 4-0 record vs. Kirkham's 3-3.

"I kept trying to get him to quit. The simple fact he wasn't making any money and all his time was taken up training. I wanted him working construction to feed the kids."
-- Dennis Kirkham "With his size, I didn't want to stay standing up and risk taking a kick to the head," Iraburo told FanHouse. "I knew his strengths were going to be his kicks and his reach."

Iraburo had Kirkham down to the mat within seconds where Iraburo landed a few headshots, none considered illegal or out of the norm for an MMA bout. The referee called a stoppage to the fight about 40 seconds into the match.

"As the fight was ending, he wasn't limp," Iraburo said. "His head was up and off the canvas. It wasn't like he was already out."

But Kirkham soon lost consciousness and never recovered, despite attempts by medical personnel at ringside.

An autopsy found that Kirkham died from subarachnoid hemorrhage of the brain. Aiken County Coroner Tim Carlton, who was not present at the autopsy, said the report showed no indication of a prior injury. But Cantu, the neurosurgeon based at Emerson Hospital in Concord, Mass., said such an injury would likely only turn up in a brain scan.

Cantu studied the brain of the first known MMA fighter to die from injuries during competition, American Doug Dedge. He suffered a head injury two days before the fight that took his life at an unregulated tournament in the Ukraine in 1998. The first MMA death known to take place on U.S. soil occurred in 2007 when Houston's Sam Vasquez died days after suffering severe head injuries.

Regardless of whether his final amateur fight played a role in Kirkham's death, Dennis Kirkham said he doesn't hold Iraburo responsible.

"Carlos didn't do anything wrong," Kirkham said. "He just did what any fighter would do. It could have been anybody in there. It's just one of those things."

South Carolina approved MMA last year, although the state's athletic commission's requirements fall short of the benchmarks set by Nevada and California. According to the American Association of Professional Ringside Physicians website, a full physical is not required to fight in the state, let alone an annual neurological exam that some other state commissions require.

The International Sport Karate Association sanctioned the bouts that night and the organization's commissioner, Robert Mason, told FanHouse that ISKA would follow the investigation closely. Mason didn't rule out that Kirkham, considered a lightweight despite being unusually tall for the weight class, could have put himself at a disadvantage. He added that restrictions on that basis would be tough to implement "unless the height-to-weight ratio was found to be a symptom of a specific genetic weakness or predisposition."

"I don't think of martial arts athletes as 'gladiators,'" Mason said. "There is no intent on the part of anyone to have these athletes suffer death or serious injury."

In the end, much of the onus for a fighter's safety lies with the fighter, according to Nevada State Athletic Commission executive director Keith Kizer.

"You rely on the fighter to tell you the truth," Kizer said.

On his entry form, Kirkham left blank a question that asked if he had ever been suspended in any state.

It wasn't necessarily due to the dangers of the sport, but Dennis Kirkham had been doing his best to shift his son's focus away from MMA and onto a steady job.

"I kept trying to get him to quit," Kirkham said. "The simple fact he wasn't making any money and all his time was taken up training. I wanted him working construction to feed the kids."

His three children with his longtime girlfriend, including one infant, are in the process of relocating to Minnesota. The grieving process for the entire family is still in its early stages.

For those who trained and fought with Kirkham, he's more than a tragic MMA statistic.

"He got a whole lot of guys into [MMA] and he has inspired a lot of us to keep fighting," Moses Avery said. "No words could ever express the goodness Tree had in him."