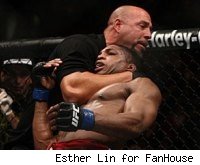 "Big Dan" will reprise his role as the referee on "Ultimate Mustache Fighter" on the Thursday night (really Friday Morning) edition of NBC's Late Night with Jimmy Fallon.

Miragliotta and fellow referee Herb Dean have appeared in UMF segments throughout the past year. He will have his hands full this time around, though, keeping things in order for the scheduled bout between Dr. Phil's mustache and 1980's John Oates' mustache.

If you aren't familiar with the segment, here's a video of Miragliotta reffing the now infamous John Stossel's mustache vs. Geraldo Rivera's mustache bout of September 2009.