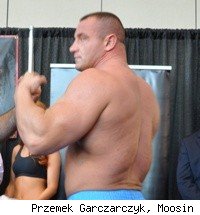 It's tough to know what to make of Moosin. Earlier this week, the upstart MMA organization was eyeing a bout between "World's Strongest Man" Mariusz Pudzianowski and former internet brawler Kimbo Slice for their fall event. Then the very next day the company sent out a press release wherein the "face" of the company, Eric "Butterbean" Esch, harshly criticized the Polish strongman's fighting abilities.

"I know he allegedly broke his foot in the fight against [Tim] Sylvia," Butterbean is quoted as saying about Pudzianowski, "but he didn't show anything before he quit."

It only gets more out of hand from there, as Esch insists that Pudzianowski punches "like a girl," and says he needs to prove himself before he gets another big fight with Moosin.

Fun stuff for a press release, but what gives? Is any of this for real, or are Moosin and Butterbean working an angle? To find out, I called up the Bean himself to try and get some straight answers.

Share This press release Moosin sent out is entitled "Butterbean rips Pudzianowski," and then it has a lot of fairly inflammatory quotes from you about one of your organization's fighters. How serious is this?

I didn't actually rip him. You know how publicists can kind of blow things out of proportion. With Moosin – I'm a partner with Moosin and there's five of us – my feeling is that he's not up to par to fight on our Chicago card. They want to use him because he's from Poland and Chicago has a big Polish community, but there are other Polish fighters we could use and not have to pay Pudzianowski-style money, since he's just not up to par for a main event type fight. He's just not there. He can't even throw a punch. He throws all arm punches and, yeah, he's a big strong guy, but he's not throwing with power.

It kind of bugs me. I don't know if you've watched him fight, but he's just not that good. I'm not trying to bash him, just being honest. I don't know why they released it, but they asked me and I told them how I felt. He needs to learn how to throw a punch that's going to knock somebody out, not make them look at him and laugh.

There was talk earlier this week of having him fight Kimbo Slice. What do you think the odds are of that happening?

I don't think that will happen. I'm trying to get somebody other than Pudzianowski, to be honest with you. He's not the caliber of fighter we need headlining our fight. He's tough, he's strong. You can't argue with that, what with him being the five-time World's Strongest Man. But he can't throw a punch. The only way I'd be comfortable with it is if he actually got a serious boxing trainer.

He kicks phenomenal. That's how he broke his foot against Tim Sylvia. He kicks good. His ground game? He can survive. But without some stand-up, I don't want to see him fight. I don't feel Moosin needs to promote somebody who's not exciting to watch.

The timing of this release and the nature of it makes me wonder if maybe this is all a work so that you can build up a rivalry with him and then fight him yourself on the next Moosin show.

Me? I'd love to fight him, but I haven't heard anything on it. Nobody's mentioned that to me yet.

But you want to fight him?

After the last fight you seemed pretty pleased, on the whole, and you had a quote about treating the fighters like kings so they wouldn't want to go anywhere else. Don't you think these criticisms seem to contradict that statement?

I was talking about the whole card, all the fighters. At the event and everything, we treat them great. And I think Pudzianowski could be on the next card. That'd be okay. But not as a main event. What I was talking about with treating them like kings is, everyone who fought on that card would love to fight for us again because we treated them so well.

Do you think Tim Sylvia versus Hong Man Choi would be a better main event than something with Pudzianowski?

A lot of people are going to look at that, or look at Pudzianowski and some of the other match-ups you guys have done or considered doing, and say, 'These guys just want to put on circus fights.'

You know what? Being called a circus fight? I think people want to watch an entertaining fight. They want to watch something that's going to be good and fun to see. What would you call Brock Lesnar? You take a pro wrestler and, yeah he can fight, but he's a circus fight because of who he is. Look at James Toney. Now James Toney's a circus act. Lesnar's more of a real fighter, but if he wasn't such a freak of nature he wouldn't be on the card. James Toney's nothing but a circus act. But I don't think ours would be a circus fight. I think it'd be a good fight.

Whether it's against Pudzianowski or not, what are the chances of you fighting on the next Moosin show?

I don't see it happening. I don't plan on fighting a lot. I'm more on the promoting side than on the fighting side. No, I don't see it happening. And I don't think Pudzianowski's people would let him fight me on the next Moosin show because I'd knock him out. I mean, Sylvia hits hard, but he doesn't hit as hard as I do. They know I'd just come straight at him and bang. Tim wanted to do the whole MMA thing. Me, I just want to take those little bitty gloves and put them on somebody's chin. That's my goal when I fight. They'd never let him fight me. Never. He'd be an easy fight.