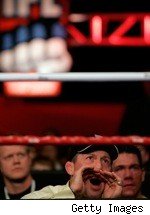 The praise for Pat Miletich's work as a Strikeforce commentator is both effusive and widespread in the MMA world. Just listen to what Joe Rogan had to say about him in Ariel Helwani's "Backstage" video earlier today, and you'll get a sense of that.

But what's responsible for Miletich's ability to turn complex technical knowledge into explanations even the most casual of fans can understand? According to him, it's the result of many years of air travel.

"I remember over all the years before the sport was really popular, explaining it to people on airplanes everywhere," Miletich told MMA Fighting. "People would ask, 'Why do you have a black eye?' Or, 'What do you do for a living?' I'd tell them and they'd say they never heard of it, so I got used to explaining it in layman's terms."

Miletich's ability to clearly and simply explain a sport that is anything but is certainly an asset, but it's only part of what's made him such a popular commentator in such a short time. The MMA trainer and former fighter also comes off as surprisingly adept and comfortable on camera, especially considering his limited experience in broadcasting.

Though, to hear Miletich tell it, just because he looks calm and collected, that doesn't mean he is.

"I guess I'm a person who, after all these years of fighting, is addicted to the high energy. Chasing tornadoes is fun for me, taking a flying lesson every once in a while is fun for me. Standing in front of a camera and doing a live opening is, for me – you know, I'm not someone like Joe Rogan who's been in front of a crowd for years and is really good at it – so for me, it's kind of a terrifying experience to be honest with you."

If there's any real criticism of Miletich's work as a commentator, it's that he doesn't get the chance to do it often enough. So far Strikeforce has chosen to use him almost exclusively on the smaller Challengers series shows, keeping him off the broadcast team for the major Showtime and CBS events.

"I don't know what the situation is," Miletich said when asked if he might take on a more consistent role in the future. "I've been delegated from the beginning to do the Strikeforce: Challengers series, and I'm fine with that. If they call me to do another show, I'm more than happy to do it. It's fun and I really like doing it. ...I really appreciate the positive feedback I'm getting and I'm trying to do my best."

Strikeforce officials did not respond to requests for comment on whether there were plans for Miletich to take over a greater share of the broadcasting duties for future events, but Miletich insists he's not at all displeased with his current role.

"I don't know what their plans are for the future. I just know that I'm happy to be working in a sh--ty economy."