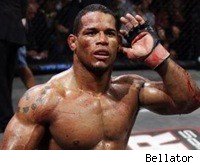 While Hector Lombard waits to defend his Bellator middleweight title against Alexander Shlemenko later this year, the organization has booked him a non-title fight against former NFL running back turned MMA figther Herbert "Whisper" Goodman.

The fight is scheduled to take place at the Bellator Season 3 premiere on Aug. 12 at the Seminole Hard Rock Hotel and Casino in Hollywood, Fla.

MMA Junkie first reported the possibility of the bout Tuesday.

The 32-year-old Lombard is unbeaten in his last 18 fights in a row. He won the Bellator middleweight tournament in the organization's inaugural season and returned to defeat late-replacement Jay Silva in just 6 seconds in May. The American Top Team member is considered to be one of the most underrated middleweights in MMA, but has yet to be challenged by serious competition as of late.

Goodman, who may or may not represent the challenge Lombard has been seeking, will enter the fight with a 15-8 record. He lost his most recent fight to Jason Norwood in June. Prior to that defeat, he had won five in a row, including a win over one-time UFC competitor Dante Rivera.

Bellator 24 will also feature the start of the organization's 115-pound women's tournament. Megumii Fuji vs. Angela Magana and Jessica Aguilar vs. Lynn Alvarez will kick off the first round.