Claude Patrick vs. James Wilks on Tap for UFC 120 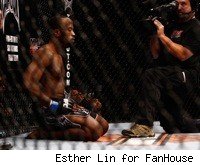 A welterweight bout between Claude Patrick and James Wilks for UFC 120 is close to being finalized, MMA Fighting has learned. The fight was first reported by Mauro Ranallo of Hardcore Sports Radio's The Fight Show.

UFC 120 is set to take place at the O2 Arena in London, England, on Oct. 16. It will air on tape delay in the United States on Spike TV.

The Canadian-born Patrick, 12-1, won his Octagon debut at UFC 115 last month, defeating Ricardo Funch via second-round submission. The win marked his 11th in a row. His lone loss came against Drew McFedries in his second pro fight in 2002.

Wilks, an English-born fighter who now calls California home, most recently defeated Peter Sobotta via unanimous decision at UFC 115. Following his TUF 9 Finale win over DaMarques Johnson, Wilks, 7-3, has gone 1-1 in the UFC. His loss came against Matt Brown at UFC 105.

UFC 120 will be headlined by Michael Bisping vs. Yoshihiro Akiyama. Also, Carlos Condit vs. Dan Hardy and John Hathaway vs. Dong Hyun Kim are expected to take place on the card.