Who Needs the Heavier Weights? Not Japan 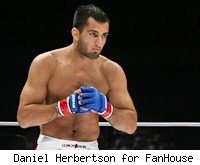 Event Producer Keiichi Sasahara made an announcement that will have a profoundly positive long term effect on Japanese MMA after DREAM.15. In 2011, both DREAM and Sengoku will have bantamweight and proper featherweight weight classes. Finally Japan's deepest divisions will be given a chance to shine on the country's grandest stages.

But let's take this further. What if DREAM and Sengoku abolished the heavier weight divisions?

DREAM and Sengoku's parent companies are private entities so their financial situations are not known but issues with sponsors and occasionally poor attendance make it safe to assume that they aren't exactly rolling in the dough. The Japanese promotions need to be careful how they spend their money and for them, investing in the sport's most expensive divisions - heavyweight and light-heavyweight, is just burning money.

Gegard Mousasi, Muhammed "King Mo" Lawal and Alistair Overeem are recent notable examples of fighters who were developed in Japan but will probably be fighting the majority of their remaining career in America and so DREAM and Sengoku (also K-1) have basically served as development programs for American promotions.

When Gegard Mousasi eventually wins the DREAM light heavyweight title, how many times do you think he will defend it? My guess is zero. There are no compelling fights for King Mo in Japan other than a rematch with Mousasi but that fight would probably take place in Strikeforce. DREAM were unable to find a worthy opponent for Alistair Overeem at DREAM.15 so the fight didn't happen but there are plenty of fights for him in America.

The migration of fighters to America show that it isn't a sound investment at light-heavyweight and above.

Mixed martial arts is truly mainstream in Japan and there is no stigma against the sport like we see in the west and so boxing, K-1 and MMA are quite comparable. The numbers achieved in this boxing fight are achievable by MMA and from 2003-2006 Pride and K-1 regularly pulled in ratings of over 25%, achieving a high of 42.5% with Bob Sapp vs.Akebono.

The Naito vs. Kameda fight showed that fight sport is not dead as a high ratings product in Japan and that MMA is not being promoted correctly.

When Bob Sapp and Akebono started to score huge ratings, K-1 promoter FEG seemed convinced that they needed circus acts to get the big numbers. FEG continued putting on freakier and freakier matches and the ratings continued for a short time but the public got bored, the quality of the sport plummeted and the kakutougi (fight sport) ratings boom eventually came to an end.

Naito vs. Kameda showed that kakutougi can still draw incredible ratings in Japan, fighters don't need to be freaks and they don't need to be heavy. Two world class fighters with a well promoted, compelling story will still rate highly. The end of the 2003-2006 boom showed that "Super-Hulk" style matches will make for short-term success but long-term failure.

Japan doesn't need the heavier weights and without them on Japanese events there would be more room for bouts at the lighter weights.

DREAM and Sengoku don't hold nearly as many events as the UFC and with fewer weight divisions, fighters could fight more often. Mitsuhiro Ishida is now in the prime of his career and he went almost 11 months without a fight. Japan's second-best lightweight Tatsuya Kawajiri has fought once this year. Things like the 2009 Super-Hulk tournament and DREAM's pointless ongoing light heavyweight tournament may provide short term success but are causing good fighters with long term viability to become inactive. Promoters cannot hope for fighters to become ratings draws if they are only fighting once a year as a casual fan cannot get to know and feel for a fighter that they see so irregularly.

With the money freed up from the heavier weights, investment can be made in Japan's lighter weight fighters. More money would lead to better training facilities, better trainers, and of course more focused fighters who have to worry less about their financial situation. Japanese fighters often come back from America and talk of how far ahead the training is there. Money can help to bridge that gap. It will ultimately lead to better fighters and good fighters are easier to promote.

Finally and most importantly, Japan's deepest divisions are lightweight and below and they have not yet been given a chance to shine on the country's grandest stages. Local fighters are easier to promote as they can be in the country all year round for media appearances, speak the language, understand the culture and are easier to relate to for the public.

That Japanese promoters have only now just started the bantamweight division and the fixed featherweight division shows alarming short-sightedness but finally gives the Japanese a ray of hope that the heavier weights do not.