Waylon Lowe vs. Steve Lopez on Tap for UFC 119 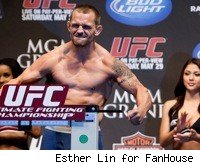 Lightweights Steve Lopez and Waylon Lowe have agreed to meet at UFC 119, MMA Fighting has learned.

The 155-pound bout will take place on the undercard of the Sept. 25 card, which is set to take place at Indianapolis' Conseco Fieldhouse.

The event will serve as a homecoming of sorts for Lopez who was born in South Bend, Ind.


Share
Lopez (12-2) dropped his Octagon debut to Jim Miller at UFC 103 last September. The fight ended when Lopez severely dislocated his left shoulder in the second round.

Lowe (8-3) also lost his UFC debut to Melvin Guillard at UFC 114 in May. Prior to the loss, the 29-year-old had won six consecutive fights.

The organization has yet to officially announce the event, but Dana White confirmed with MMA Fighting last week that it would be headlined by Antonio Rodrigo Nogueira vs. Frank Mir II and Antonio Rogerio Noguiera vs. Ryan Bader.