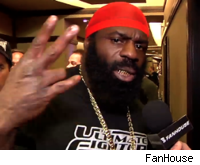 After a successful U.S. debut earlier in the year, the Moosin promotion is scheduling an Oct. 9 follow-up, which will take place in Chicago, MMA Fighting has learned.

Moosin executive Corey Fischer has confirmed the organization's intention for a second show, and said the current plans include bringing back previous headliners Tim Sylvia and Mariusz Pudzianowski, in separate fights.

"I would say the Kimbo-Pudzian fight is the furthest from being finished, but we're trying to work on it and make it happen," Fischer said.


Share
The 36-year-old Slice (4-2) was cut from the UFC after losing via second-round TKO to Matt Mitrione at UFC 113. He has not fought since.

Slice's representative "Icey" Mike Imber did not respond to a message seeking comment.

Speaking with MMA Fighting from Korea, where he is scheduled to meet with Choi and his representatives tomorrow, Fischer said that he believes the Sylvia-Choi fight is a strong probability. The fight nearly happened at last year's Dynamite 2009 show in Japan, but fell through.

Choi, a kickboxer by trade, is 2-3 in his pro MMA career, but all of his losses are to experienced MMA stars: Fedor Emelianenko, Mirko Cro Cop and Ikuhisa Minowa. His last win was a first-round victory over former baseball slugger Jose Canseco in the 2009 DREAM Super-Hulk tournament.

In addition to the aforementioned fighters, Fischer expects to bring back Mike Campbell, who defeated longtime MMA veteran Yves Edwards in a close decision in the first Moosin event, and says the card could include up to 11 foreign fighters.