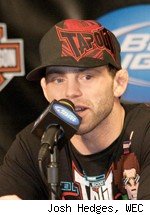 Jens Pulver said in May that he doesn't have a choice; he's got to fight. Released by Zuffa last month following his fifth straight WEC loss, it didn't take Pulver long to find his next match.

Pulver will try to have his hand raised for the first time since beating Cub Swanson in his WEC debut at WEC 31 in December 2007. Since then, losses to Urijah Faber (twice), Leonard Garcia, Josh Grispi and Javier Vazquez chased him from the WEC. His last four losses have been in the first round with three straight by submission. Pulver is one of just two fighters to beat former UFC lightweight champion BJ Penn at 155 pounds. The other is Frankie Edgar, who beat Penn for the title in April.

It was Sylvia's second straight win after a three-fight skid that saw him submitted by Antonio Rodrigo Nogueira and Fedor Emelianenko and knocked out in nine seconds by former boxing world champion Ray Mercer. Buentello recently snapped a two-fight losing streak with a Shark Fights win over Bryan Humes. He had returned to the UFC last December, but lost to Stefan Struve and Cheick Kongo before being released.

War on the Mainland spokesman Benny Ricardo told MMA Fighting that Powerhouse World Promotions, the company behind the event, the promotion would be holding boxing events to go along with MMA.

"Careful scrutiny has gone into the matchmaking so that we can provide the MMA fans around the world the well-known legends and the up-and-coming future of the fighting sport," Ricardo said. "The fans readily recognize the quality and uniqueness of this great card."

He also said the promotion is not setting out to compete against current top-shelf U.S. promotions.

The promotion is planning a second show in 2010 in Atlantic City. The debut show in Irvine was originally planned for San Diego, where Powerhouse is based out of. But Ricardo said several factors played a part in moving the show to the Bren Events Center on the UC-Irvine campus.

"The factors that went into deciding to hold the event (in Irvine) were many, not the least of which was that Orange County has already been home to the great Affliction shows at the Honda Center in Anaheim," Ricardo said. "So the market is an already ready-made market. The proximity to some great fight fans from Los Angeles, the Inland Empire, Cochella Valley and San Diego County was also a key."

Also on the card, former UFC middleweight title contender Thales Leites (17-3), on a three-fight winning streak since his release from the UFC, including victories over Dean Lister and Jesse Taylor, will face UFC and Strikeforce vet Falaniko Vitale (27-9). And Jason Lambert (24-11) and Allan Goes (17-3), another pair of UFC vets, will meet in a light heavyweight bout. Lambert picked up his first win in more than three years earlier this spring, snapping a five-fight string that saw him lose to Wilson Gouveia, Luiz Cane, Jason MacDonald, Vladimir Matyushenko and Matt Horwich.