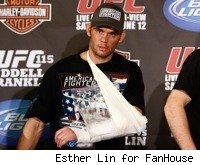 Weeks after Chuck Liddell broke Rich Franklin's left arm in their fight at UFC 115, Franklin has come up with a novel idea for what to do with the cast he's been wearing since: He's going to raffle it off, with the proceeds benefiting the Susan G. Komen Breast Cancer Foundation.

By purchasing a $5 raffle ticket at Franklin's web site, fans can be entered into a drawing to win the cast, which has been signed by Liddell and will be signed by Franklin after it's removed. There's no date set for the drawing because Franklin isn't yet sure when his doctor will tell him it's time to remove the cast, but it's expected to come off later this month.

Liddell broke Franklin's left arm with a kick that Franklin blocked in the first round of their June 12 fight. Franklin managed to shake it off and knock Liddell out with a hard right hand at the end of the first round. That knockout was, according to UFC President Dana White, the end of Liddell's UFC career.