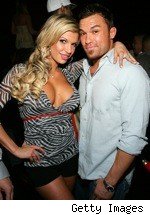 Fighting for the first time outside of the WEC in four years, former WEC lightweight champion "Razor" Rob McCullough stopped Isaac de Jesus in the first round with punches Friday at Tachi Palace Fights' "Stars and Strikes" event in Lemoore, Calif.

McCullough was only one of the many notable Zuffa vets who competed over the weekend. Check out the weekend highlights below.

In other action on the card, John Alessio sent War Macine off to county jail on a rear-naked choke loss. War Machine, who proudly refuses to submit, fell to sleep in the third round. Gabe Ruediger continued his winning ways, earning a first-round TKO over Lenny Lovato for his sixth straight victory.

Turning to the IFC in Mt. Pleasant, Mich. on Saturday, Jeremy Horn scored his fifth straight submission victory by tapping out Sean Salmon in the main event. Horn revisits the promotion where he participated in a one-night tournament in September 2003 that saw him defeat two fighters -- including a knockout over Forrest Griffin -- before losing in the finals to Renato "Babalu" Sobral by decision.

In the co-headliner, Mike Whitehead stepped into the cage for the first time since losing to Muhammed "King Mo" Lawal at Strikeforce last December and stopped two-time UFC competitor Chase Gormley. Gormley stepped in place of Jeff Monson, who fulfilled his commitments with the Impact FC instead.

Before Dream aired on HDNet, the high-definition channel aired live the XFC 11 from Tampa, Fla. Micah Miller, the younger brother of Cole, bounced back from an April loss to Michihiro Omigawa in Japan and knocked out hometown favorite Bruce Conners at 2:01 of the first round. Also, Kim Couture lost on television again in brutal fashion being bloodied up by Marianna Kheyfets before tapping to a triangle choke at 3:06 of the opening round.

At the inaugural Impact FC in Australia, Josh Barnett made quick work of Geronimo Dos Santos at 2:35 of the first round. Meanwhile, Brian Ebersole, Rameau Thierry Sokoudjou, Jeff Monson and Karo Parisyan all earned wins. Former UFC welterweight champion Carlos Newton was the sole UFC veteran who lost on the card, dropping the unanimous decision to Ebersole.