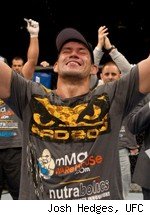 The UFC and Spike TV on Monday made official the Fight Night 22 card for Sept. 15 in Austin, Texas.

Fight Night 22 will take place at the Frank Erwin Special Events Center on the University of Texas campus and will feature a main event middleweight fight between Demian Maia and Alan Belcher and a co-main event rematch between Mac Danzig and Matt Wiman.

The main card will air live on Spike. And as has become customary, the card is expected to serve as the lead-in for the Season 12 premiere of "The Ultimate Fighter," which features welterweight champion Georges St-Pierre and Josh Koscheck as coaches.

Maia (12-2, 6-2 UFC) will fight for the first time since losing a five-round decision to middleweight champion Anderson Silva at UFC 112 in April. He has lost two of his last three fights. The first loss of his career came at UFC 102 last August when he was knocked out by Nate Marquardt in just 21 seconds. Belcher (16-6, 7-4 UFC) has won two straight and four of his last five. He has won post-fight bonus awards in his last four bouts – two Fight of the Night honors and two Submission of the Night awards.

Danzig, winner of Season 6 of "The Ultimate Fighter," gets another shot at Wiman after a controversial stoppage in their fight at UFC 115 last month. Caught in a guillotine choke, with Wiman on top, Danzig lost when referee Yves Lavigne picked up his arm to see if he was out. Believing he was, he stopped the fight. But Danzig popped up in immediate protest – and even Wiman wanted to keep going. Because of the controversy behind the decision, the rematch was ordered up.

Also official for the main televised card is a TUF veterans lightweight bout between Cole Miller, a Season 5 contestant, and Ross Pearson, winner of Season 9. And Jim Miller, who has won four straight, takes on Gleison Tibau.

Other rumored bouts for the card include Season 8 TUF winner Efrain Escudero vs. John Gunderson; Nick Catone vs. Tomasz Drwal; and Jared Hamman vs. TUF 8 contestant Kyle Kingsbury. Other bouts for the card will be officially announced by the UFC in the coming weeks.

The UFC last held an event in the Lone Star State in September for UFC 103 in Dallas. Before that, Houston played host to UFC 69 in April 2007, which featured Matt Serra's monumental upset of St-Pierre to win the welterweight title.