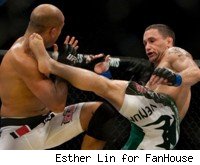 The midway point of the year brings with it hot dog-eating competitions, all-star games, heat strokes and fireworks. And some of those fireworks come inside the cage.

It also brings an opportunity to look back on the first half of the year that has been in mixed martial arts.

All week, MMA Fighting will hand out its awards for the half-year's best knockouts, submissions, fights, fighters, fight cards and a Sunday special from Ben Fowlkes you won't want to miss.

But Monday, we kick things off with the top upsets through the first half of 2010. And wouldn't you know it? Ray Hui and Matt Erickson had to duke it out over the biggest upset – and they fought ... to a draw.


Share Frank Edgar over BJ Penn
UFC 112: Invincible | April 10, 2010
I'm going to catch a lot of flack for this, but I thought Edgar beating Penn was more shocking than Werdum defeating Fedor. We knew if Werdum could pull off the upset, it was going to be off his back. For Edgar vs. Penn, there wasn't any one area where Edgar had the clear advantage. Edgar is a high-level fighter who presents a challenge to anyone in the lightweight division, but against Penn? Especially after Penn's completely one-sided affair against Diego Sanchez? Edgar is a solid striker; so is Penn. Edgar has a wrestling background; Penn has an excellent takedown defense (Edgar went one for 11 on takedowns in their fight.) Werdum beating Fedor is a huge upset in the sense that Fedor had never suffered an actual loss. It was Fedor's first loss in nearly a decade (To Penn's credit, it was only his first loss at lightweight since 2002). It only feels shocking because of how strange it was to see the image of a beaten Fedor. And apparently it was weird for Fedor, too, since he didn't seem like he knew how to tap! But unlike the mystery of how Edgar could beat Penn, we all knew Werdum held a decent shot at beating Fedor. The art of jiu-jitsu is ever-evolving and Werdum, a multiple time grappling and BJJ world champion, trains with great BJJ competitors on a daily basis. Meanwhile, Fedor insists on sticking with Sambo over BJJ and it's hard to keep your finger on the pulse of new grappling techniques when you're across the world from the major hotbeds of MMA training. With that said, I was surprised at how quickly he finished Fedor and how reckless Fedor was jumping into Werdum like that, but you gotta figure Fedor playing to his opponent's strength was eventually going to catch up to him.

Matt Erickson's No. 1
Fabricio Werdum over Fedor Emelianenko
Strikeforce: Fedor vs. Werdum | June 26, 2010
While I was not one of the many people who had Fedor ranked as the No. 1 pound-for-pound fighter in the world – he's been No. 3 on my list behind Georges St-Pierre and Anderson Silva for some time – there is no denying his dominance. Yes, it can be argued that he hasn't fought the same level of competition the last few years that he used to fight. And yes, it can be argued that he hasn't fought often enough. But when you go unbeaten for as long as Fedor did, when you dominate your opponents the way Fedor did, when your resume includes the kind of wins Fedor's does, when your star power allows you to just go by one name ... well, when you finally lose, it's a big deal. Fedor was more than a 6 to 1 favorite against Werdum. By most accounts, Werdum could beat Fedor on the ground, and that was it. That's what happened. And I think what makes this such a big upset is that Fedor is known as one of the most cerebral fighters in the sport's history. For him to make such a monumental tactical error as dropping Werdum and then following him into the one spot he could lose is what clinches the top spot in my book.

3. Jake Shields over Dan Henderson
Strikeforce: Nashville | April 17, 2010
Henderson made his Strikeforce debut at the height of his popularity coming off three straight UFC wins. Whether Strikeforce would like to admit it or not, it was banking on its free agent pick-up to beat Shields here and lead the middleweight division. First, early commercials focused on Henderson. And the most obvious suggestion that Henderson was already seen as the next champ? This fight was Shields' final one on his Strikeforce contract, meaning Shields could potentially score a major win on national television before bolting to the UFC. Early on, the fight unraveled as the experts and fans predicted. Henderson landed his huge right hand that flattened Shields. However, Shields recovered and by the second round controlled Henderson all the way up until the fifth with excellent wrestling and jiu-jitsu for the unanimous decision. – Ray Hui

4. Pat Curran over Roger Huerta
Bellator 17 | May 6, 2010
Curran's three-fight run through Bellator's Season 2 lightweight tournament was a string of nothing but upsets, so this could be considered an award for all three wins. But his win over Huerta was the biggest. After turning plenty of heads by knocking out Georges St-Pierre training partner Mike Ricci in the quarterfinals, Curran was paired against former UFC standout Roger Huerta – Bellator's big-ticket offseason signing, and the man the promotion brought in specifically to win the Season 2 lightweight tourney. But Curran had something to say about that. Huerta was a substantial favorite, but Curran had plenty to say about that from the opening bell, working kicks and nicely timed strikes in the first round. The second round was all Huerta, but Curran's persistence in the third, along with nice striking and a takedown was enough to give him a 29-28 win on all three judges' scorecards. It was close, and many fans and analysts saw it for Huerta. But it went down as the biggest win of Curran's career - at least until he beat Toby Imada in another upset a month later to take the title. – Matt Erickson

5. John Hathaway over Diego Sanchez
UFC 114: Rampage vs. Evans | May 29, 2010
Entering his fight against Hathaway, Sanchez's three career losses were against Josh Koscheck, Jon Fitch and BJ Penn – all UFC household names. Coming off the Penn championship challenge, this fight appeared to be a way for Sanchez to settle back into the welterweight division while serving as a test to see where the 22-year-old Hathaway stacks up. But instead, Hathaway argued there was no such thing as too much too fast, dropping Sanchez in the first round and continued to batter Sanchez for the convincing unanimous decision. – Ray Hui

HM. Manny Gamburyan over Mike Brown
WEC 48: Aldo vs. Faber | April 24, 2010
After losing his featherweight title to Jose Aldo, Brown was hoping to continue down a path toward a shot at regaining the belt. A win over Gamburyan was what he needed to likely get there. But Gamburyan had other plans. From the get-go, Gamburyan kept a quicker pace, working combinations and waiting to counter Brown's jabs. Midway through the first round, as Brown moved in with a right, Gamburyan countered with a big right of his own that dropped Brown instantly. The win was Gamburyan's third straight in the WEC after dropping down to 145 from the 155 he fought at in the UFC, and it earned him a shot at Aldo's belt in September. – Matt Erickson