Falling Action: Best and Worst of the Weekend That Was 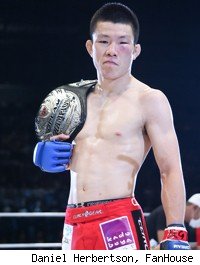 There may not have been a UFC or Strikeforce event this weekend, but that doesn't mean that there weren't still plenty of people punching, kicking, and choking each other all around the world.

Some of them might have required you to set the DVR or wake up at odd hours, and others might not be available on video at all just yet, but the point is some stuff happened. In order to give that stuff its due respect, we now take a look back at the weekend's action to examine who the big winners and losers are this Monday afternoon.

Biggest Winner: Shinya Aoki
He's had some hard times of late, said some perplexing stuff (even by Aoki standards), but nothing turns a frown upside-down quite like a first-round submission victory. Will it do anything to change the minds of people who think he's too one-dimensional? Absolutely not. Does it matter? Debatable. All I know is that when Aoki is wrenching people's limbs in submission holds, then giving bizarre interviews about how badly he wanted to snap their bones for all to see, it feels like everything is right with the world.

Biggest Loser: Jose Canseco
If Canseco really wants that Strikeforce bout with Herschel Walker some day, maybe he shouldn't be trying so hard to turn himself into a running punchline of the sports world. He lost a boxing match against a 60 year-old athletic trainer in Arkansas this weekend. Though he claims he wasn't really trying that hard, he sure looked tired for a guy who had put forth such a meager effort. I get it – Canseco needs the money. What I don't understand is, why would anyone pay to see this joker?

Latest Slip Toward Irrelevancy: Josh Barnett
He won a fight everyone expected him to win in Australia, and proved very little doing it. You'd like to say that this is the last pointless fight Barnett will have to take before getting right with the U.S. commissions and finding his way into one of the major MMA promotions, but that might be more optimism than is warranted by reality. For his part, Barnett seems pretty content to crush the occasional can in between pro wrestling appearances in Japan. It's good work if you can get it, I suppose, though it'd be really great to see him get proactive about fighting someone who matters, and fast.

Easiest Victory: Gegard Mousasi
Jake O'Brien decided to test Mousasi's takedown defense immediately after the opening bell, and while Mousasi didn't exactly shut him down cold, he did take the opportunity to lock in a guillotine choke and make it an early night. I'm sure it's nice to pick up the easy paycheck without even having to take a single punch, but it won't do much to restore Mousasi's standing in the light heavyweight ranks.

Most Disappointing, But Not Surprising Loss: Melvin Manhoef
After his New Year's Eve victory Manhoef said he was really focusing on improving his ground game this year because he was tired of getting submitted. His submission loss to 8-5 Tatsuya Mizuno at Dream.15 showed that he still has some work to do on that front. It was Manhoef's second straight loss, and also the second straight time he started like a hurricane and finished like a tepid breeze. For the first couple minutes of any fight, he's still one of the most exciting fighters in MMA. And if only those first couple minutes weren't so fun to watch, I might not be so disappointed by what inevitably follows.

Most Prolific: Jeremy Horn
It wasn't under the bright lights of the big show, but "Gumby" won his 89th fight this weekend with a first-round submission over Sean Salmon. It was his 109th fight overall, and just a little over a month before his 35th birthday. If you don't respect that kind of work rate, you don't appreciate how hard it is to fight 10-20 times a year. Sure, maybe Horn's fights weren't always against the best of the best, but he fought anyone and everyone he could, and quite a few MMA greats have an 'L' on their records thanks to him. There's a special place in the MMA Hall of Fame (which doesn't technically exist, but whatever) for a guy like Horn.

Most Fitting End: War Machine
Last weekend the fighter known as War Machine got choked unconscious by John Alessio in Lemoore, California. This weekend he has to report for jail in San Diego. It seems only right that Mr. Machine should head into the pokey on a loss. He didn't train much for the fight, he said, but remained very proud of himself simply for making it to the third round on such little preparation. Anyone else think that sentiment sums up his entire career to this point? Don't try too hard and you'll never be disappointed, the War Machine mantra suggests. Just makes you wonder what he could have done if he didn't prefer excuses to results.

Best Debut: Marianna Kheyfets
"The Crushen Russian" made the most out of a golden opportunity by battering Kim Couture at XFC before locking on a triangle choke to finish her pro debut with a win. Not that it's the accomplishment of a lifetime to beat Couture (2-3), who's been getting by on more name recognition than ability in her brief MMA career, but Kheyfets certainly didn't look like someone who had never had a pro MMA fight before. If she hadn't faced Couture, odds are most of us wouldn't know or care about the 1-0 Kheyfets. But give her credit – she heard opportunity knocking and then she punched it in the face until it fell down. Careers have been launched on much less.