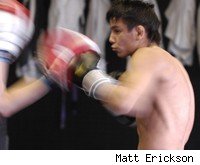 Miguel Torres is angry. Or, to quote him more accurately, he's "a pissed off Mexican right now."

Torres, the former WEC bantamweight champion, learned Friday his next fight will come Sept. 30 against Charlie Valencia at WEC 51 in Broomfield, Colo. And he told MMA Fighting just moments after he agreed to the bout that he's ready for a style change – this time reverting back to his old form. There's something to be said for not fighting angry, but for Torres, the formula had been working.

"Now I'm looking to come back and use my old style and stay aggressive," Torres said, "and just beat the (crap) out of people."

Torres (37-3, 5-2 WEC) took a 17-fight winning streak and three straight defenses of the bantamweight belt into the main event of WEC 42 last August. But Brian Bowles handed him the first knockout of his career and left Las Vegas with the title. Seven months later, hoping to show his first loss in nearly six years was a fluke, Torres was cut – badly – by Joseph Benavidez. Blood gushing from his forehead, which would later require plastic surgery, Torres was soon tapping out from a guillotine – his first submission loss and his first successive defeats.

Share The lifelong resident of predominantly blue-collar Northwest Indiana, who owns and runs his own gym in Hammond just a few miles from his boyhood home in East Chicago, said some coaching advice got in his head before the two losses. He wants to bring back "angry Miguel," the scrapper whose cage improvisation helped him to 37 wins and a reputation as one of the world's best fighters.

"When I fought Bowles, a lot of people were criticizing my style for leaving myself open a lot," Torres said. "I was being criticized by a couple of coaches that my style was too aggressive, I come forward too much and I leave myself open too much. And I always knew that, but I didn't really care because I was like, 'Prove it to me, or shut the (heck) up.' I didn't care."

The proof came about four minutes into the first round against Bowles. Torres staggered the challenger and had him backing up. And with the same aggressiveness he had displayed his entire career, he followed Bowles in, looking to finish. But Bowles landed a right that put Torres on the canvas, and he followed up with shots on the ground that put Torres' lights out for the first time.

The aftermath had Torres thinking plenty about those coaches' advice, and he adjusted his style for the fight with Benavidez.

Self-coached in his own gym for the majority of his career, Torres had branched out before the fight with Benavidez in March. He worked jiu-jitsu with Robert Drysdale. He worked striking with Mark DellaGrotte. He rolled with Kenny Florian and Frank Mir. But if he could change one thing, it would be the decision against Benavidez to fight with caution.

"I'm really frustrated, not just with my performance (against Benavidez), but with myself in general in holding back and not fighting my last fight," Torres said. "My last fight really made me angry. Every second I didn't attack, I let my opponent's confidence grow. And it was very frustrating to watch that fight because I didn't fight. The Bowles fight, at least I went for it. I hurt him, I chased him, I got caught. I went for it, I got caught. The Benavidez fight, I didn't do (crap). I did not do one thing."

Torres said regardless of whom the WEC puts in front of him, he's ready to show fans – and his opponents – what they haven't seen since his five-round war with Takeya Mizugaki at WEC 40. Against Valencia (12-5, 5-3 WEC), Torres will face a well-rounded fighter riding a three-fight winning streak. He had planned to spend as much as two months in Montreal working with Firas Zahabi, head trainer for Georges St-Pierre, at the Tristar Gym. But he may shorten that now.

"I haven't seen a big change in (Valencia's) game," Torres said. "With my aggressiveness, I think I match up well against him. I might do maybe a 5- or 6-week camp up in Montreal. I'm already in shape now. I've been training for the past month and a half. I'm 150 (pounds) right now – I'm in shape. This training camp I'm going into is me just polishing up myself."

WEC 51, though not officially announced by the organization, will take place Sept. 30 at the 1stBank Center in Broomfield, Colo., just north of Denver. The main card will air live on the Versus cable network with a main-event featherweight title fight between champion Jose Aldo and challenger Manny Gamburyan. Torres-Valencia is expected to be the co-main event.