Revised Featherweight and New Bantamweight Class for DREAM in 2011 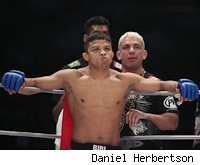 DREAM Executive Producer Keiichi Sasahara announced post DREAM.15 that the featherweight limit will be revised and a new bantamweight division will be created for 2011. Sasahara reasoned that for fighters like Caol Uno who will come down from lightweight, he would like to offer them some flexibility when choosing weight classes.

The official limits have not been decided yet but the bantamweight division will probably be contested at 60 kg (132 lb) or 61 kg (134.5) and the featherweight division should be raised to 65 kg (143 lb).

The decision to change the weight limits will have quite a few implications within DREAM and FEG. 63 kg featherweight champion Bibiano Fernandes has not yet been spoken to regarding the changes and Sasahara admitted that it is quite likely that he will be angry about it. Fernandes will need to decide what weight limit he will be moving to and a decision will be made regarding his title then.
Since DREAM.13, the promotion's "featherweight" bouts had been contested at catchweights between 60-65 kg (132 lb - 143 lb) and at DREAM.15 Michihiro Omigawa very publicly refused fighting at the strange official 63 kg (138.9 lb) weight limit.

While standardization is always welcome in the Japanese scene, the move will certainly have negative effects in the short term and really, FEG should have adhered to the global standard from the beginning. Japanese fighters are only recently really been learning to cut weight properly and changes to the weight limits is most likely going to cause some difficulty for some fighters initially.

K-1's new 63 kg division is a roaring success following the Japan GP finals earlier this month and TBS are reportedly very pleased with the new product. There is a long tradition of MMA athletes crossing over to K-1 and such matches are always produce solid ratings but with the 63 kg weight limit in an MMA no man's land starting 2011, it will make the transition much more difficult.