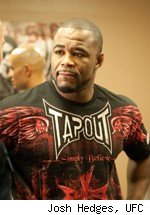 HAMMOND, IND. – Sitting on a well-worn weight bench in his friend Miguel Torres' sweltering gym on Friday, Rashad Evans said there's no reason for him to be in a hurry.

Evans, the former UFC light heavyweight champion, beat Quinton "Rampage" Jackson in May to become the top contender for Mauricio "Shogun" Rua's belt. But Rua, who won the title from Lyoto Machida in May with an injured knee, will be on the shelf until at least March recovering from surgery. And that means Evans is on the shelf, as well – by choice.

Evans beat Forrest Griffin to win the light heavyweight title at UFC 92; he lost it to Machida in his first defense at UFC 98 in May 2009. It was the first loss of his career. He rebounded with wins over Thiago Silva in January and Jackson in their now-infamous grudge match to put himself back on the title track.


Share
He said the potential time off between fights – which would be around 10 months if Rua is able to fight in March – isn't a concern to him. Evans went nearly 10 months between fights after beating Michael Bisping at UFC 78 before knocking out Chuck Liddell at UFC 88, which got him his title shot against Griffin.

And while Machida's manager, Ed Soares, has said publicly he believes there should be an interim title fight between the two former champs, Evans said – from a preparation standpoint, at least – it's not something he needs to do.

"I've been fighting for seven years now, so I know what it's like and I know what it means to fight and everything like that," the Greg Jackson product said. "I'm a veteran in this sport. I'm not going to forget how to fight. I won't forget what it's like to be in there. I'm not going to forget all the experience that I have before. For me, going in and fighting for the sake of fighting, I'm over that stage in my career. If I do, it just creates another barrier, another roadblock. They say he won't be able to fight until March. This won't even be the longest time I've had off."

Rua beat Machida with a decisive knockout in their rematch at UFC 113 in Montreal in May. That win was a stark contrast to their first title fight at UFC 104 last October, which Machida won by a controversial unanimous decision. Even UFC president Dana White went on record saying he believed Rua won the fight and ordered a quick rematch.

Evans said he expected a Rua victory in the rematch – though maybe not by knockout.

"Nothing surprises me in the MMA game – that's just how things happen," Evans said. "When he got caught with that shot, I was surprised that it ended. But I wasn't surprised that (Shogun) won. I thought he was going to win."

The loss was the first of Machida's career, just like Machida's knockout of Evans was the first loss of his career. Machida's father and coach recently said he believes his son would be best to retire now, following the knockout loss – because it could take five to 10 years for the karate practitioner to get back on track from a spiritual standpoint.

But Evans found that philosophy to be a bit "extreme."

"I don't know his dad's competing history, but as a competitor myself, it's good to have a short memory," Evans said. "You just have to go on and put your best foot forward. I think the longer you dwell on something, it can start to negatively affect you. If you accept what happen, you understand why it happened and you put it behind you, you can propel and move yourself forward a lot further than if you just dwell on it and say, 'Oh, I lost, I lost.' You lost. Then forget about it."

Evans said his memory was short following his loss to Machida – though he won't forget the loss.

"The burning and desire and everything leading up to why I felt like I lost, it stayed with me," Evans said. "It's still with me now. But the fact that I lost dissipated. How I lost – it just wasn't my night. I got knocked out. It happens in the sport."

It happened for the first time to Shane Carwin a week ago against Brock Lesnar when he was submitted for the first loss of his career while trying to take Lesnar's heavyweight title. Carwin, a Team Jackson product at Colorado's Grudge Training Center, dominated the first round but had nothing left in the tank for Round 2.

"I think he found out that he was a fighter," Evans said. "It's one thing to go in there and be the biggest and baddest and toughest guy. It's another thing to go in there and meet somebody else who's as big and bad as you are. And then it's not about being the biggest, baddest, toughest guy – it's about skill and technique and everything else. All the intangibles that are going to make you better than that guy. When he was getting his (butt) whipped that first round, he had to think to himself, 'What the (heck) did I get myself into?' But then he found a way to get beyond all that. And that's where you find out who you really are as a fighter and as a person."