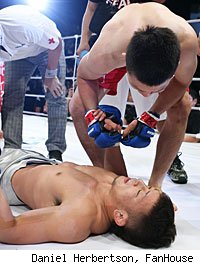 Two of the fighters who lost lopsided decisions on April's Strikeforce card on CBS bounced back with impressive victories Saturday at Dream 15 in Saitama, Japan.

In the main event, Dream lightweight champion Shinya Aoki submitted Tatsuya Kawajiri to retain his title, looking as good as he ever has three months after looking as bad as he ever had in a loss to Gilbert Melendez.

Aoki, wearing board shorts rather than his trademark spandex grappling pants, immediately took the fight to the ground and went for one of his signature foot lock submissions, twisting and turning Kawajiri's leg for a full minute on the ground before Kawajiri finally had to tap out. There was nothing more to it than that, as Aoki -- Japan's biggest MMA star -- did exactly what he wanted to do.

Aoki grabbed the microphone and professed his love to his fiancee after the fight, and then said he expects to get a rematch with Melendez in Japan on the September Dream.16 card. (Melendez, however, has previously said he doesn't expect to fight again until last 2010.) Kawajiri, meanwhile, had to be helped out of the ring with what appeared to be an injured ankle.

For as short as Aoki's comeback victory was, former Strikeforce light heavyweight champion Gegard Mousasi got back on track with an even shorter win over Jake O'Brien. O'Brien shot for a takedown at the outset, but Mousasi calmly stayed on his feet, sunk in a guillotine choke, and forced O'Brien to tap out just 31 seconds into the fight.

O'Brien isn't a bad fighter; he went 4-3 in the UFC from 2006 to 2009, and none of the losses (to Andrei Arlovski, Cain Velasquez and Jon Jones) were anything to be ashamed of. But he looked absolutely terrible in his Dream debut. He missed weight on Friday and fought on Saturday like a guy looking to collect his paycheck and get out of there.


Share
On that April Strikeforce card, King Mo Lawal offered a blueprint for how an American wrestler can take Mousasi down and dominate him from the top. But on Saturday, Mousasi showed against O'Brien that not just any American wrestler can do that. At age 24, Mousasi is still one of the sport's best young fighters, even if King Mo took some of the bloom off the Mousasi rose.

In other action, Melvin Manhoef showed once again that his complete lack of a ground game makes him better suited to kickboxing than to MMA. Although Manhoef came out striking -- like he always does -- against Tatsuya Mizuno, as soon as the fight went to the floor he was a fish out of water, and Mizuno forced him to tap to a kimura seven and a half minutes into the first round. The victory improved Mizuno's record to 8-5, and he's now set to fight Mousasi for the Dream light heavyweight title in September. Mousasi will be a huge favorite.

Brazil's Gesias "JZ" Cavalcante, who was once considered among the best lightweights in the world but has been pleagued by injuries, finally got back on track by winning a split decision over Japan's Katsunori Kikuno, the DEEP lightweight champion. It was Cavalcante's first win since September 17, 2007. Cavalcante is expected to fight for Strikeforce later this year.

Michihiro Omigawa continued his roll of late by forcing Young Sam Jung to tap out to a guillotine choke in the first round of their bout. Omigawa has now won seven of his last eight fights.

The first two fights of the night were striker vs. grappler match-ups that went to the grapplers, as Mitsuhiro Ishida ground out a unanimous decision victory over Daiki "DJ.taiki" Hata, and Kazuhiro Nakamura did the same to Karl Amoussou.