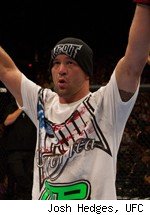 A welterweight rematch between Chris Lytle and Matt Serra has been booked for UFC 119.

The news was first reported by MMA Junkie on Saturday and MMA Fighting has confirmed with Lytle that the bout will take place in Indianapolis on Sept. 25 – in front of Lytle's home crowd.

The fight is a rematch from the Season 4 finale of "The Ultimate Fighter," which Serra won by split decision. That win gave Serra a shot at Georges St-Pierre for the 170-pound title, which he won with a shocking first-round TKO. That win is considered by many to be the biggest upset in the history of the UFC, and possibly the sport. He would lose the title back to St-Pierre in his first defense a year later.

Serra (11-6, 7-6 UFC) last fought at UFC 109 in February, knocking out Frank Trigg in the first round. Since winning TUF 4, Serra has fought just four times – the aforementioned fights with St-Pierre and Trigg, plus a grudge match loss to Matt Hughes at UFC 98.

Though Lytle's turnaround time between UFC 116 and UFC 119 will be short, he said he's excited to able to fight in front of his hometown fans again. Lytle is an Indianapolis firefighter when he's not inside the cage. He last fought in Indiana against Brown on a United Fight League card in 2007.

And though he had his four-fight bonus streak ended at UFC 116 – despite being in the running after a come-from-behind submission win – he said he hopes to get a new streak started in September.

"It's a dream come true for the UFC to be in Indy and have me on the card," Lytle said. "I hope (I can get another bonus). It's hard on a card with so many great fights. I hope the Indy card is dull and boring – more bonuses for me!" 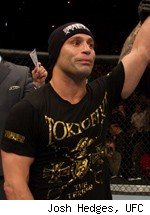 Lytle said he will change things up against Serra this time around in an attempt to change the outcome from the pair's first meeting, which will be nearly four years prior when the two meet in September

"It's more about me fighting the way I want to," Lytle said. "I didn't last time, and always regretted it. This time, I'll fight to win. It won't be 'fight not to lose.' "

UFC 119, though not officially announced by the promotion, will take place at the Conseco Fieldhouse in Indianapolis. It will be headlined by a heavyweight rematch between Frank Mir and Antonio Rodrigo Nogueira. Nogueira's twin brother, Antonio Rogerio, will fight Ryan Bader in the co-main event. Also on the card, Sean Sherk will fight for the first time in 16 months when he meets Evan Dunham.