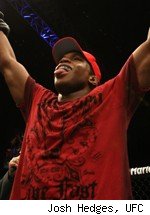 A Bellator source confirmed Saturday to MMA Fighting that the promotion had not, in fact, inked the British fighter to a contract, refuting a story first reported at bjpenn.com citing undisclosed sources.

"Paul Daley is not under contract with Bellator," the source told MMA Fighting. Per the promotion's policy, no further comment could be given since Daley is not one of the company's fighters. There is no word whether or not Daley is in talks with Bellator to join the promotion following his fight against Daniel Acacio for Impact FC in Sydney on July 18.

Daley (23-9-2) was in the midst of a promising start to a UFC career, knocking out Martin Kampmann and Dustin Hazelett in the first round in his first two fights with the promotion. But against Josh Koscheck at UFC 113 in May, everything fell apart.

Daley lost a unanimous decision in the fight in Montreal to determine the No. 1 contender for welterweight champion Georges St-Pierre's title – as well as the opportunity to coach opposite him on the upcoming season of "The Ultimate Fighter."

There had been plenty of talk between the two leading up to the fight, and in the first round Daley threw a knee toward the head of a still-grounded Koscheck. Koscheck immediately covered his eye. Replays appeared to show Daley's knee merely grazing Koscheck – no doubt furthering the bad blood on Daley's side. But Daley was never in the fight and was taken down almost at will by Koscheck several times.

But after the final horn in the third round, Daley threw a punch at Koscheck, hitting him in the face as Koscheck walked back to his corner. Koscheck won a unanimous 30-27 decision on all three cards, and Daley received an exile from the promotion when UFC president Dana White said at the post-fight press conference he would never fight in the UFC again because of the altercation.

While it didn't take long for Daley to land the Impact FC fight, it apparently remains to be seen if other major U.S. promotions like Bellator or Strikeforce will give him an opportunity.