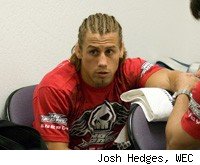 WEC star Urijah Faber, who was scheduled to fight Takeya Mizugaki on Aug. 18 at WEC 50, has been injured in training and has pulled out of the fight.

Faber delivered the news via Twitter on Friday, saying, "Been quit (sic) the last few days, i was injured in pract on Mon. Just got results Im Out on Aug 18th. Not 2 happy."

He followed that up by telling Versus.com the injury was to his lower body and that he is "going to come back as soon as possible."

The fight was to be Faber's debut at bantamweight after years as a featherweight, including a long run as the WEC's 145-pound champion. He won the featherweight belt at WEC 19 and defended it five times before losing it to Mike Brown at WEC 36.

Sources close to the WEC have confirmed to MMA Fighting that Mizugaki will no longer be fighting on the card. The Faber-Mizugaki bout was to be the co-main event leading into Dominick Cruz's first defense of his bantamweight title against Joseph Benavidez.

Faber is 2-3 in his last five fights, including his title bout loss to Brown. He followed that with a win over Jens Pulver, then lost again to Brown attempting to regain the featherweight belt. He beat Raphael Assuncao at WEC 46 to get another crack at the title, this time against current champion Jose Aldo. But he lost a unanimous decision to Aldo, who used a barrage of leg kicks to stymie the former champion.

There is no word yet on a timetable for Faber's return or whether the fight with Mizugaki will still happen, but at a later date.