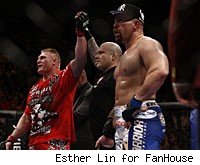 I think Rosenthal made the right call, and his explanation of his own work in the fight pretty well demonstrates that he did what referees are supposed to do in such situations: He made sure the fighter was intelligently defending himself and allowed the fight to continue.

Share "He took some hard shots when they were against the fence," Rosenthal said of Lesnar on ESPN's MMA Live. "He was looking for a way out. He was blocking some punches. At one point he tried to spin to push Shane away and took a couple shots. And then again, went for a deep half guard position and took a couple more shots. When he curled up after that is when I commanded him to fight back, which at that point he did, and then he went for feet on the hips to push Carwin away and was able to get to his knees. He pretty much ran with it. He heard -- he responded to my commands."

Watching the first round live as it happened, plenty of fans thought Carwin was about to knock Lesnar out cold. But re-watching the fight, you see that Rosenthal had it exactly right: Lesnar was spinning, using his feet to push Carwin away, and blocking punches with his arms. Carwin was obviously dominating the first round (it was a clear 10-8 round and it's a surprise that one judge scored it 10-9), but Lesnar was intelligently defending himself right up to the point where he got back to his feet with 1:05 left in the round.

In the biggest fight of the year, Rosenthal stepped up with a big-time performance.