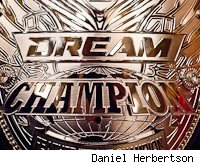 A bout that has been years in the making, and the most important bout ever under the DREAM banner, will take place on July 10. DREAM.15 champion Shinya Aoki and challenger Tatsuya Kawajiri will meet in a lightweight title fight to decide who will be Japan's representative to the world.

Also Gegard Mousasi, Melvin Manhoef and Jake O'Brien will attempt to advance towards light-heavyweight gold, Gesias "JZ" Cavalcante will attempt to rebound against Katsunori Kikuno and Mitsuhiro Ishida and Michihiro Omigawa will return in featherweight action.

Below, a full breakdown of FEG's latest effort with predictions so good, I like to call them pre-fight results.


Share
DREAM Lightweight Title Fight
Shinya Aoki vs. Tatsuya Kawajiri
Shinya Aoki's career has been like a roller-coaster ride. A roller-coaster ride filled with gogoplatas, heel hooks, triangles, the infamous "Keiichi Sasahara 2010" on Mizuho Hirota and the DREAM lightweight title. They are the peaks of Aoki's ride, and they have been exhilarating.

The drops are devastating though.

A no-contest with Gesias "JZ" Cavalcante left fans calling him a wimp and a cheat. A Joachim Hansen TKO left him in tears and without a title. Hayato Sakurai KO'd him with some of the sickest ground and pound ever seen in the sport. Most recently Gilbert Melendez humiliated him and his country.

One of MMA's most polarizing figures, Aoki badly needs to reclaim some pride here and one of the most aggressive and successful submission artists in MMA's history has a statement to make in his first title defense.

As Aoki has been very publicly exploding and imploding on the grand stages of MMA, Tatsuya Kawajiri has been quietly churning through opponents. His only faults over the last four years have been a TKO loss to Eddie Alvarez in one of the fights of the year and a highly controversial decision loss to Gilbert Melendez. Kawajiri is extremely difficult to KO and extremely difficult to submit. A consistent and grinding wrestler with very solid striking, the alias "Crusher" suits him perfectly.

This fight will decide the best fighter in one of the bests divisions in Japan and whoever takes this fight will represent Japanese MMA to the world. I feel like I could write a book about this match, but when FEG asked me for a prediction for the official pamphlet, I was only allowed 160 characters. I'll post that here.

"Gilbert Melendez showed the perfect game plan to beat Aoki. Kawajiri is a better striker than Melendez and should be more effective. Kawajiri by Decision."
Pick: Kawajiri

Gesias "JZ" Cavalcante vs. Katsunori Kikuno
JZ used to be one of the sport's elite. He finished Michihiro Omigawa, Nam Pham, Vitor Riberio, Rani Yaya and Hiroyuki Takaya all within a minute. Knee injuries mean that we haven't seen that fighter since 2007, but now he claims to be back 100 percent and healthy.

Katsunori Kikuno doesn't have the names under his belt that JZ does, but he does have the weight of Japan resting on his shoulders as one of the strongest hopes for Japan's future. The hypnotizing karateka is like something out of a video game and his "moon kick", a devastating front kick to the body that usually results in a KO, is his special move.

JZ may be healed but there is a huge mental problem that comes along with knee injuries. Can the Brazilian trust his knees? Kikuno isn't the kind of fighter that will hammer the legs to test the injury and his straight forward, stalking style will mean that side to side movement isn't tested so it seems like the perfect fight for JZ to test himself in. If JZ is healthy, then I like him to take down Kikuno and edge out a very close decision. This entire fight depends on whether JZ is mentally and physically healthy, and if he is, he a test too large for Kikuno at this point.
Pick: Cavalcante

Jake O'Brien has never been accused of being very exciting or diverse. An Indiana state champion wrestler, he does what he is good at – wrestles. O'Brien amassed a 4-3 record in the UFC before being released and is looking to make his first real impact at light-heavyweight here.

It seems that O'Brien is having troubles with the weight. As I write this, we are unsure whether O'Brien will even be fighting at all and Ricco Rodriguez may be fighting in his stead.

Regardless of the weight issues, I don't think Mousasi will make the same mistake twice. The 24-year-old is a very fast learner and his time training wrestling since the King Mo fight will have no doubt been fruitful. If the fight does go ahead, I like Mousasi to stay on the feet and get the KO or finish O'Brien on the mat after softening him up. The weight issues certainly won't help O'Brien.
Pick: Mousasi

DREAM Light Heavyweight Tournament
Melvin Manhoef vs. Tatsuya Mizuno
Manhoef's aggression, power and striking technique have allowed him to hang with the best heavyweights in K-1. Melvin Manhoef is a natural middleweight. Unfortunately his chin is weakening rapidly and it cost him dearly in his last fight with Robbie Lawler, a fight he was completely dominating.

Mizuno has been training in Seattle with Matt Hume and Rich Franklin for the past six months and is the best that Japanese representative DREAM were able to come up with at light heavyweight.

It is reasonable to think that Manhoef is too aggressive at times. He has recently acknowledged that he has a problem with aggression. But unfortunately for Mizuno, he feels like he isn't aggressive enough. Against excellent submission artists like Paulo Filho or Yoshihiro Akiyama, too much aggression can be a problem. Against guys like Robbie Lawler, his chin can be an issue. Mizuno doesn't represent a threat either way and so he will be unconscious in the first round.
Pick: Manhoef

Michihiro Omigawa vs. Young Sam Jung
Omigawa has been on a tear for the last two years. Hatsu Hioki, Marlon Sandro, Hiroyuki Takaya, the list goes on. With his excellent boxing and movement and at featherweight, he is one of the best in the division. Young Sam Jung is not. He has only two recorded professional fights (both first round KO losses) but claims to have a record of 7-3. The details on those unrecorded fights are a little sketchy.

One may theorize that Omigawa is being fed Jung so that he can be built up for a title fight with Bibiano Fernandes. That would be plausible if he was contracted for more than one fight, but he isn't. There is no logic behind this fight and Jung may also have problems with logic after he is KO'd by Omigawa in the first round.
Pick: Omigawa

Mitsuhiro Ishida vs. Daiki "DJ.taiki" Hata
Ishida is making his debut at featherweight here and the pint-size wrestler looks like he has made the cut easily and seems to be in fantastic shape. He was outsized for all of his career thus far but still holds excellent victories over Gilbert Melendez and Marcus Aurelio and now at featherweight should be a force to be reckoned with in Japan's best division.

Daiki "DJ.taiki" Hata is an unusual but good striker and displayed in his fight with Kazuyuki Miyata that he does not have the answer for wrestlers. Unfortunately, he hasn't been training for them either and has been focusing on his K-1 career for the past year.

Ishida is tailor made to beat DJ.taiki, and with his seemingly infinite energy, will put on a takedown, control and pound clinic to win the decision. DJ.taiki stated in a pre-fight interview that if he loses, he is considering going down to bantamweight. While that would mean no longer fighting with DREAM, it may be the best thing for his fight record.
Pick: Ishida

Kazuhiro Nakamura vs. Karl Amoussou
Kazuhiro Nakamura may never really step out from the shadow of Hidehiko Yoshida but this will be the beginning of his journey as the leader of Yoshida Dojo. A UFC, Pride and Sengoku veteran, Nakamura has fought the best of the sport and has come out with a mediocre record but now he is fighting at middleweight, he looks much better.

French Chute Boxe styled striker Karl "Psycho" Amoussou has been compared to a prime Wanderlei Silva. Really, it is a bit of a stretch as he hasn't even begun to approach the accomplishments of Silva but he is still extremely exciting to watch.

Nakamura's boxing is underrated and it is certainly good enough to allow him to survive on the feet and get Amoussou to the mat. There he should be able to control the first 10-minute round and get Amoussou exhausted making the last five minutes even easier. Nakamura has disturbing tendency to strike with strikers. If he does so here, it is going to be very exciting but potentially painful for him.
Pick: Nakamura