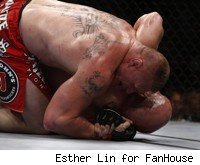 Brock Lesnar will make his next title defense against Cain Velasquez at UFC 121.

Lesnar, 5-1, is coming off a riveting second-round submission win over Shane Carwin at UFC 116 last weekend in Las Vegas. Prior to the win, he had been on the sidelines due to a battle with diverticulitis.


Share
Meanwhile, Velasquez most recently knocked out Antonio Rodrigo Nogueira at UFC 110 in Australia this past February. The American Kickboxing Academy member is a perfect 8-0 in his MMA career.