So What Ever Became of Fedor Emelianenko's WAMMA Belt, Anyway? 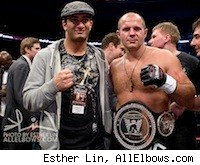 It's the question that few of us have bothered to ask, probably because even fewer of us bothered to care, but what's the status of Fedor Emelianenko's WAMMA heavyweight title after his submission loss to Fabricio Werdum?

I know, I know. Somehow, what with Brock Lesnar winning a dramatic comeback victory and the heavyweight ranks getting shaken up like a snow globe in the hands of a petulant child over the last few weeks, it doesn't seem all that important.

That said, is Werdum now the WAMMA champ? Did Fedor FedEx him the belt? And if so, will he wear it with the same sense of pride that Fedor did? I did a little asking around in order to find answers to these and other almost relevant questions, and what I discovered was that the fans aren't the only ones who haven't given the issue much thought.

When questioned by Ariel Helwani on "The MMA Hour" before the Strikeforce bout, M-1 Global's Evgeni Kogan defended the WAMMA strap thusly:


Share
"What it means, and what it means for us, is the idea that anyone can fight anyone. ...Eventually everyone is going to fight everyone else. It's going to have to happen. It's inevitable. That's what the WAMMA belt stands for. It stands for the hope for the future that the best people in the world will meet the best people in the world without organizations, without contracts, without all this stuff getting in the way. That's why we hold the WAMMA belt in such importance. ... It stands for an idea. Not only for Fedor but for us."

When Helwani pressed Kogan on whether the belt would be up for grabs when Emelianenko met Werdum, Kogan responded, "Good question. I believe that it would be."

Now, however, it's a different story.

"I was mistaken," Kogan told me via email this week. "The WAMMA belt was not on the line in the June 26 bout."

In other words, Werdum can stop waiting around by the mailbox for that belt to show up.

But what does the future hold for this symbolic title? Will it forever remain Fedor's, no matter how many fights he may lose? Or will the belt that's supposed to stand for openness and purity of competition in MMA eventually get put on the line in an actual fight?

When I put that question to Kogan, he answered that he believed the belt would ultimately be put up for grabs again, but as for when and where, Kogan said, "I'd put this question to WAMMA, I think it's more their territory."

Fair enough. Only no one seems to know if WAMMA is even still an operating entity.

The website doesn't appear as though it's been updated since November of 2009, former rankings committee members (such as myself and a bunch of other people) haven't received any remotely recent requests for input on fighter rankings, and emails to WAMMA officials about whether the organization still exists have thus far gone unanswered. In fact, a PR contact who used to work for WAMMA told me he hasn't been able to get an answer to any emails or phone calls to his former bosses in over six months.

It's sure starting to seem like WAMMA has just up and quit without telling anyone. Guess that means there's no one to make Fedor give up that belt if he doesn't feel like it.

But then again – and maybe (probably) I'm the only one who even cares enough to mention it – if this belt really is supposed to be a symbol of open competition beyond the boundaries of organizations and restrictive contracts, shouldn't it be a piece of hardware that other fighters get to compete for?

And if it's going to stand for the great dream of a unified MMA landscape, shouldn't the belt's journey begin with a trip to Fabricio Werdum's house?