Shinya Aoki Fighting Anything and Everything 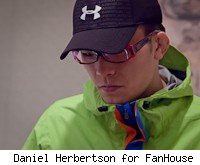 Shinya Aoki has not allowed me to take a decent photo of him in over a year. Every time I ask him for a photo he covers his face. I have never had any problems with him, and we used to have a good working relationship. It wasn't just me though, it was all foreign press. I have often wondered what caused this dramatic change in attitude.

Watching the signing ceremony for his title fight against Tatsuya Kawajiri at DREAM.15, I noticed that he was doing the same thing with the Japanese media. On Thursday, a member of the Japanese press commented on it.

"At the signing ceremony you had the aura that it was difficult for us to get close to you..."

Aoki commented without looking up.

Such responses have been typical to foreign media over the past few months but it shocked the Japanese media. Someone else was brave enough to ask a follow up question.


Share
"Before a fight is there anything you always do to prepare?"

It was a softball question but a roundabout way of trying to get some insight into his mind. It's common within the Japanese media.

Aoki responded. "I feel like I am fighting a lot of things. So, I can focus on my fight."

The Japanese press didn't respond to this answer, but a member of the foreign press did.

"What are those things that you are fighting in order to focus on this fight?"

Aoki laughed when the question came in English and was then translated. He made eye contact for the first time and smiled, although not at all warmly and replied, "Anything and everything. Including things I am not able to share with you."

Following that, he was given some softball questions regarding his condition before the press breathed a collective sigh of relief as the interview was concluded. The interview was less than two minutes in total and the Japanese press simply didn't know how to respond to Aoki.

Aoki once had a reputation for being a clown and his open training sessions were always something that the press looked forward too. Most people who have been following the Japanese scene for any length of time will remember his open training session with Mazakazu Imanari where he dressed like a school girl and frolicked through the gym for 15 minutes.

For the first time at DREAM.15, Aoki did not have an open training session and did not grant any interviews.

As his fights got more serious and his ranking climbed, he has become more serious. That is understandable but it doesn't really explain the hostility. But now there is one other thing that I have noticed. He had been fighting more and more foreign opponents.

Since DREAM began in 2008, he has fought nine times against foreigners and only four times against Japanese fighters. His comment that Japan will become a colony of American MMA if he lost to Gilbert Melendez showed an obvious national pride.

Is this hostility towards me and the rest of the foreign press linked to the fact he was fighting foreign fighters? Is he associating foreigners in general with his foreign opponents?

His comments regarding Japan as a colony of MMA created a lot of backlash against Aoki. It motivated Hayato Sakurai to challenge Nick Diaz. It motivated Keiichi Sasahara to bring back the cage. It motivated Daisuke Sato to create the DREAM.14 video in the theme of World War II. Japan started to turn on Aoki.

Now Aoki has to defend his lightweight belt for the first time and it is against a Japanese rival that has been looming in the background for years. The pressure is visible on Aoki. He has had a deep set scowl on his face ever since he started training for this fight.

"Anything and everything. Including things I am not able to share with you."

Now Aoki has turned on them.