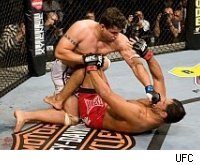 With UFC 119 on the hunt for star power, it's the Nogueira brothers to the rescue.

MMA legend Antonio Rodrigo Nogueira gets his long-awaited rematch with Frank Mir in the main event of UFC 119, MMA Fighting has learned.

White also confirmed a light-heavyweight bout pitting Antonio Rogerio Nogueira vs. Ryan Bader in the co-main event, a possibility which was originally reported by MMAWeekly.com.


Share
In that defeat, Mir became the first fighter ever to finish Nogueira, closing the fight with a second-round TKO, though Nogueira maintains his body was compromised by a staph infection, and has always voiced the desire for a rematch.

Mir hasn't fought since a March loss to Shane Carwin in a No. 1 contenders fight. After losing via TKO, Mir contemplated a move to light-heavyweight, but ultimately decided to stay in the division where he once wore gold.

The event will mark the first time the Nogueiras have fought on the same card since July 2006, when "Big Nog" earned a decision over Fabricio Werdum while "Little Nog" earned a TKO win over Alistair Overeem during a PRIDE show.

While the matchup of former champs might boast more star power than the co-main event, the light-heavyweight bout pitting "Little Nog" against Bader holds more importance in its division, as neither man has yet lost during his UFC career.

Bader (11-0) shot to fame on season eight of the Ultimate Fighter, and has earned four straight victories in the octagon, including a knockout over Keith Jardine in February for his most recent win. Nogueira represents a major leap forward for the Arizona-based fighter. Ranked by many as one of the sport's top 10 light-heavyweights, Nogueira is 19-3 overall and 2-0 in his brief UFC run. In his most recent fight, he won a controversial split decision against late replacement Jason Brilz.

In such a deep division, the loser of this match faces the prospect of falling far down the list of contenders.

The UFC had hoped to stage the Brock Lesnar vs. Cain Velasquez championship fight as UFC 119's main event, but Lesnar's wife is due to have a baby in the next few weeks and the champ also likely needs some time off after a long training camp returning from illness as well as a physically grueling bout with Carwin at UFC 116.

White told MMA Fighting a timetable for the Lesnar-Velasquez fight is still undecided.

UFC 119 is expected to take place at Conseco Fieldhouse in Indianapolis on Sept. 25.