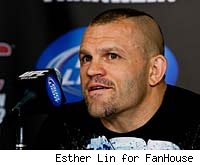 If there's anybody who should understand what Chuck Liddell is going through these days, it's Dana White. The UFC president said this weekend that the 40 year-old Liddell remains undecided about retirement, and apparently attending all these live MMA events as a spectator isn't exactly helping him let it go.

"He told me tonight the show open messed him up, watching [UFC 116] open," White said. "This guy's in this longer than me. He's been around forever and loves the sport. All I'm hoping is that he makes the right decision."

Reading those words, your heart has to break a little for the former champion. Imagine him sitting there on fight night -- the music blaring through the arena, the UFC highlight reel bringing the crowd to a boil, the entire cocktail of emotions he used to live for -- only now he's watching from the outside, struggling to stay in his seat.

The spirit, as they say, is willing. The body is 40 years old, and so is the chin.


Share
White wants him to retire because he genuinely cares about Liddell's health. Savor that situation while you can. Promoters turning away fighters who they could still make money off of is like the Halley's Comet of the fight world: if you miss it once, you're not likely to see it again in your lifetime.

But White should be able to understand why Liddell can't hear the UFC theme music without feeling that old familiar urge to punch someone. In many ways, he's addicted to the same drug.

Much like Liddell, White doesn't need the money anymore. He passed rich a while ago and is now rounding the bend toward wealthy. He could leave the job to someone else, spend more time with his family and less time stressing over each day's new crisis. He and Liddell could travel the country in an RV if they wanted to. They'd be the rare retirees who get to enjoy their leisure while they're still young enough to stay up past the nightly news.

So why don't they do it? Because they love it too much. The lights go down and the music comes up and some chemical switch in their brains that neither can control tells them that yes, this is where they're supposed to be.

The difference is, White can keep doing his job for decades to come. Liddell's job – while more thrilling – has an expiration date that's much harder to ignore.

We can all understand why he finds that so hard to accept. In moving from the cage to his cageside seats he may have only gone about 15 feet, but the emotional and psychological payoffs are miles apart. He wouldn't be normal if he didn't feel like he's lost something important in his life. In a way, he's lost a major part of his identity.

The question he has to ask himself is, what would make the transition easier? If he won one more fight, would that do it? If he won the title just one last time, would he then be able to relax on fight night without feeling that urge? Is there anything more he could really do in his career that would make him finally feel complete enough to walk away?

Probably not. The truth is there's no magic button you can hit to turn those reflexes off. Maybe you never completely get rid of them. Maybe you just learn, little by little, to ignore them. Maybe you do it because you have no other choice. Eventually the lights go down and the music comes up, and you have to accept that it no longer has anything to do with you.