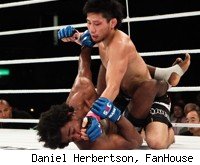 The opening round of Sengoku's Welterweight Grand Prix will conclude at Sengoku 14 on Aug. 22 at the Ryogoku Kokugikan in Tokyo, Japan.

The promotion announced Thursday that Nick "The Goat" Thompson will face Taisuke Okuno, and Kenta Takagi will meet Yasubey Enomoto to determine the two remaining semifinalists. Already slotted are Keita Nakamura and Takuya Wada, who advanced with with wins over Omar de la Cruz and Jae Sun Lee, respectively, at Sengoku 13 last month.

The winner of the Grand Prix will be crowned the first-ever Sengoku welterweight champion.

The main event of the card will feature Jorge Santiago defending his middleweight strap against Kazuo Misaki. In their first encounter, Santiago submitted Misaki with a rear-naked choke to win the belt at Sengoku no Ran 2009.