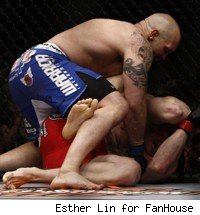 You would probably understand if Shane Carwin had some regrets about his UFC 116 title match loss to Brock Lesnar. After all, he was so close to victory. One big punch here or one little tweak there might have made all the difference. He might still be undefeated, with 13 straight first-round finishes and the undisputed UFC heavyweight championship belt in his possession.

But that's not the type of fighter Carwin is, nor the type of man he is. In his mind, there's nothing to regret since he followed his gut. When Carwin had Lesnar in trouble, he went for the finish. And though the energy expenditure ultimately factored into the physical problem that made him vulnerable for Lesnar's second-round comeback, Carwin said there's no second-guessing his aggressive attitude.

"That's me, it's instinctually who I am," Carwin told MMA Fighting. "I get somebody wounded and I go in for the kill. That's how I fight. I don't know if there's anything that changes that. I don't know if I want to change that. I think it's an exciting style, and it's who I am as a person. I don't have any regrets with what happened, but I do have things to work on and figure out. Now it's time to move forward."


Share
One of the main issues he'll address in moving forward is what went wrong with his body, starting near the end of the first round. Carwin says that towards the end of the ground-and-pound session, he started feeling the effects of lactic acidosis, a buildup of lactic acid in the body that occurs due to insufficient levels of oxygen.

His entire body started cramping and locking up as a result, compromising his ability to fight at full strength. It was, he said, unlike anything he's ever felt in his athletic life, and this is a man who before his UFC career, was a collegiate football and wrestling star. Sure he'd experienced muscle cramps before, but never felt his whole body being ravaged at once. By the time he walked back to his corner in between rounds, he knew he was in trouble.
I get somebody wounded and I go in for the kill. That's how I fight.
-- Carwin
"The concern level is pretty freaking high when you have to go back out to fight again," said Carwin, who added that he was planning to get an analysis done, and further address the situation with heart-rate monitoring, training and dieting.

But despite the severe reaction his body was having, the only thing to do was what he's always done, and that's continue competing.

"Going back out there, I could have hit him with a punch or something when he was trying to come in," he said. "Just never give up. That's just the competitor in me. If I had to crawl back out there until they stopped it, I would have done it."

Looking back, Carwin harbors no complaints towards the officiating of referee Josh Rosenthal. While many fans and media members voiced a belief that the fight could have been stopped at some point during the first round, Carwin has no objection towards Rosenthal's decision-making in the heat of the moment.

Carwin says that he did feel Lesnar wilt at times from his hard ground and pound strikes from the top, but that after Lesnar was warned about protecting himself and moving, he didn't put him away.

"I put all my eggs into that basket of finishing Brock," he said. "Josh was on top of it, he told him to improve a couple times. When you hear that and you're the top guy, it makes you want to speed things up and finish the guy that much quicker.

"The first time Josh was getting ready to call it, I thought I was real close, but after that I didn't reach that point with him again," he continued. "As a ref, I thought he did a great job. How could I have any qualms since Brock was able to come back and beat me? It would have been a different story if Brock would have taken a bunch more unnecessary punishment and got messed up from it."

Though Carwin stuffed all of Lesnar's first-round takedown tries, his body was betraying him by the second round, when Lesnar ducked under a Carwin right, scoring his first takedown of the fight.

It was there where Lesnar surprised Carwin for the first time, bypassing the expected ground-and-pound and instead transitioning to an arm-triangle choke.
I put all my eggs into that basket of finishing Brock.
-- Carwin
"Honestly I didn't think of Brock going for a submission," Carwin said. "I never imagined it. But my hat's off to him for that, for finishing the fight and coming back like a champion after taking such a rough first round."

Carwin spent a few hours in a Las Vegas hospital Saturday night, but was cleared following a CT scan, and spent Sunday afternoon doing an autograph signing before returning home. A notoriously hard worker, he has at least taken off a few days from the gym since Saturday night, though he plans to be back as soon as Thursday. Coming as close as he did to winning the UFC heavyweight championship, a few tweaks or changes, and he knows he's right back in the hunt for the coveted gold.

"Hopefully I get a few wins under my belt and some day, I hope me and Brock get to do it again," he said.