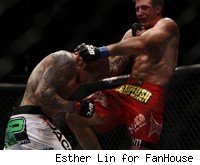 After splitting two fights with Soszynski in the last five months, though, it appears that a rubber match to their series is not likely to happen in the near future, according to UFC president Dana White.

"Anything can happen, but not right now I wouldn't say that," he said. "I don't think there's any doubt Stephan won the fight. Stephan clearly won the fight. It was a fun, entertaining, exciting fight, but when isn't Stephan Bonnar fun and entertaining?"

A second fight was signed between the two only after controversy surrounded the finish of their first bout at UFC 110 in Australia. After an exciting two rounds, Soszynski opened a deep cut on Bonnar's face due to an accidental headbutt in the third. The fight was stopped due to the cut and Soszynski was awarded a TKO win. Bonnar later appealed the decision, to no avail.

To right the perceived wrong, a rematch was quickly signed. Bonnar handled Soszynski in the follow-up, dropping him with a knee to the face in the second round and added a hail of ground strikes for a TKO stoppage win.

Despite the series being tied 1-1, it seems fans will have to wait for a third installment.

"Personally, I spent the last eight months thinking about Krzysztof, so I'm pretty sick of him," Bonnar said.