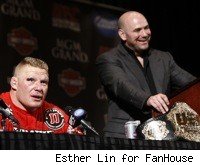 With UFC 116 in the books and a bit of a summer lull coming up until the MMA calendar kicks into high gear again in August, now seemed like as good a time as any for MMA Fighting's Michael David Smith and I to roll up our sleeves, look each other in the eye and see if we can't find some answers to some of MMA's most pressing questions.

The rolling up the sleeves and the looking each other in the eye stuff was all figurative, but you get the idea.

Below, check out our discussion on everything from the future of Fedor Emelianenko, the chances for another UFC fall curse, and more. I promise it will change your life, even if it's only in tiny, imperceptible ways that never become clear.

How has your opinion of Brock Lesnar changed as a result of his performance at UFC 116?


Share
Ben Fowlkes: I'll say this for him – he can take a beating better than I thought. The way he two-stepped away and then wilted to the mat after getting caught by Carwin, I thought he was done. But he proved his mental and physical toughness by hanging in there and coming back to win.

That said, Carwin showed us that Lesnar is by no means unbeatable. His stand-up is suspect and his takedowns aren't as unstoppable as previously thought. If not for Carwin stiffening up like a 3,000 year-old mummy in the second round, Lesnar might very easily have woken up on Sunday morning as the former heavyweight champ.
Carwin showed us that Lesnar is by no means unbeatable.
-- Ben Fowlkes
From a technical standpoint, I still don't think Lesnar is the best heavyweight in the world. He has holes in his game that his size, strength and overall physical ability often make up for. That's fine as long as he can keep filling those holes with more gym time, but after what we saw on Saturday I have to think that Cain Velasquez likes his chances right now.

Personally, I was blown away by Lesnar at UFC 116. I'm not sure if there's any other fighter in all of MMA who could have taken the punishment Carwin was dishing out during the first round. And not only did Lesnar take the punishment, he actually recovered well enough that he was back on his feet before the round ended.

I agree with you that Carwin showed Lesnar can be beaten, and if the two of them fought 10 times, I think Carwin would definitely win a few. I'm not as sold as you are on Velasquez's chances, though. The way Carwin hurt Lesnar in the stand-up had me thinking that Junior dos Santos -- not Velasquez -- is the UFC heavyweight best equipped to take the belt away from Lesnar. I expect to see that fight in 2011, and I expect Lesnar to enter the Octagon with the championship belt, having successfully defended it against Velasquez.

Last year the UFC had a huge July show followed by a great August show, but then the rest of the year was plagued by injuries and sub-par cards. Will the same thing happen this year, or does the UFC have a big autumn ahead of it?

MDS: I don't think we're going to see the string of injuries that the UFC had last year, when it felt like every week a new fight was being called off because some fighter or another got hurt. But I do think that the UFC will see a somewhat similar pattern to last year.

UFC 116 was, for my money, the best card of the year. It's almost impossible to think that the UFC could top that. And both of the August pay-per-views, UFC 117 and UFC 118, look great on paper: 117 has the middleweight title on the line (Anderson Silva vs. Chael Sonnen), the No. 2 and No. 3 welterweights squaring off (Jon Fitch vs. Thiago Alves) and a heavyweight No. 1 contender match (Junior dos Santos vs. Roy Nelson). And 118 has the lightweight title fight (Frank Edgar vs. B.J. Penn), the likely lightweight No. 1 contender match (Kenny Florian vs. Gray Maynard) and the fight that will get more mainstream media coverage than any of them, Randy Couture vs. James Toney.

But then in September, reality sets in: Three of the champions just fought in the last two months and won't be ready to return, while Shogun Rua is injured and Georges St. Pierre is waiting for the end of The Ultimate Fighter before he can fight. It's just not realistic to think the UFC can put together as many big fights in September, October and November as it's putting on in July and August.
UFC 116 was, for my money, the best card of the year. It's almost impossible to think that the UFC could top that.
-- MDS
BF: You're right, it's not realistic. It's also not wise to load each event with marquee fighters in the fall, when American sports fans are far more likely to turn their focus to college football on Saturday nights. That's why the summer is ideal for big MMA cards. The NBA and NHL seasons have both wound down, baseball is plugging along quietly and there generally isn't much for a hardcore sports fan to get too worked up about until the NFL training camps gear up again.

To me, a big summer followed by a low-key fall just makes sense for MMA, which is a sport without a season. I don't think there's any way that the run of horrible luck the UFC faced last year could possibly repeat itself unless Dana White breaks a mirror, opens an umbrella indoors, and spits on a gypsy all in the same day, but I do think it's perfectly fine if the magnitude of the events ramps down a bit in the fall. A pay-per-view sports business can't want to go head-to-head with free football every weekend.

What will the second half of the year hold for Fedor Emelianenko?

BF: If recent history is any indicator, not much. Fedor fights a maximum of two fights per year these days, sometimes less (the last time he fought three times in one year was 2005). With M-1 Global's recent struggles, it might only get more difficult to finalize a deal for him to fight again before the year is out, especially since he's only got one fight left on his Strikeforce contract, leaving the future beyond that very uncertain.

My guess? He'll aim for a rematch with Werdum in the fall. Strikeforce has been kicking around the idea of shuffling him into a title fight with Overeem, which makes absolutely no sense after Fedor's recent loss. There's also the chance that he might win the Strikeforce belt and then abscond with it, and that's the last thing Scott Coker needs at this point. The Werdum fight makes much more sense, particularly if Strikeforce can get it on CBS.

MDS: A Fedor-Werdum rematch would be a big fight for everyone involved, and I agree with you that it would make a lot of sense for CBS. But I have my doubts about it actually happening in the next six months. We've all seen that big fights too often fail to materialize, and with all the moving pieces in the M-1/Strikeforce/Showtime/CBS relationship, my guess is that they won't be able to get a deal together to put those two back in the cage before the end of 2010. I think it's just as likely that the next time we see Fedor is New Year's Eve in Japan, or some time in 2011. Fedor-Werdum 2 would be a great fight and I'd love to be proven wrong, though.

Of the seven champions in the seven major weight classes, who is most likely and least likely to lose his belt by the end of the year?

MDS: I guess the easy answer for "least likely" is Shogun, since his knee injury will keep him out of action until 2011, but aside from him I think the least likely to lose his belt is Anderson Silva. Chael Sonnen certainly talks a good game, and he's done a better job of promoting his fight with Silva than Silva has ever done of promoting himself, but I see almost no path to victory for Sonnen over Silva. And even if Silva fights one more time this year, likely against Vitor Belfort, I don't see much chance of Silva losing that fight, either. As long as Silva keeps fighting at middleweight, he keeps the middleweight title.

The most likely to lose his belt is Frankie Edgar. I admire the way Edgar fought against B.J. Penn the first time around, and I didn't think that decision was the robbery some claimed (although I did think 50-45 for Edgar was hard to justify). But if Penn shows up at his best against Edgar in the rematch, he's got a very good chance of getting the lightweight belt back.

BF: To be honest, I'm still surprised at how unbothered Penn was by losing his belt in the first place. It almost makes me wonder if he isn't losing his motivation, which, let's be honest, has always been a question mark for him. I agree that if he gets it together and returns to form, he should win that match. Then again, I never thought he could possibly lose the first fight, and look what happened.

Anderson Silva is certainly least likely to lose his title, but since you mentioned Rua I guess we might as well ask ourselves what his near future looks like. If he's out for a long time, you know the UFC won't hesitate to create another interim belt. If he rushes back into the shark tank of the light heavyweight division before he's truly ready, he's just asking to get beat.

Maybe I'm veering away from the spirit of the question here, but I think Rua's the champ who's most likely to be deprived of his status in one way or another before 2010 is finished.