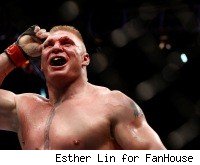 UFC 119, the organization's first event in Indianapolis, IN, is still without a main event, and considering Brock Lesnar walked away from Saturday night's title defense relatively healthy, many were pushing the idea that his next title defense against Cain Velasquez, could occur as soon as September.

"Reports that Brock is fighting in Indy Sept. 25 are false," White wrote via text to MMA Fighting.

The UFC has yet to officially announce the event in Indiana, but White confirmed it was happening last month with the Indianapolis Star. Several fights have already been reported as being closed to signed, including Matt Mitrione vs. Joey Beltran.

Velasquez hasn't competed since he knocked out Antonio Rodrigo Nogueira at UFC 110 in February.

UFC 119 will take place at Conseco Fieldhouse, home of the Indiana Pacers.