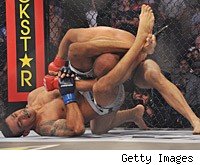 Ten days after Fedor Emelianenko lost to Fabricio Werdum, Fedor's promotional organization M-1 Global is in disarray as it attempts to adjust to a world in which Fedor is no longer considered the best fighter in MMA.

Specifically, sources with knowledge of the situation say M-1 Global has closed its head office in the Netherlands, that some of M-1's investors have already cut ties with the organization, that officials within M-1 know they've lost most of their negotiating power, and that overall, according to one source, the people at M-1 are "panicking."


Share
Netherlands office: Although M-1 Global was widely perceived in the United States as a Russian company because of its close ties to Fedor, it actually considered its office in the Netherlands to be the global headquarters. But that's not the case anymore, as the Netherlands office has ceased to exist. M-1 Global knows it can't count on as much income from Fedor in the future as it could in the past, and closing the Netherlands office was a cost-cutting move. As mixfight.nl first reported, the employees of M -1 Netherlands no longer work with the organization, although it's not clear what will happen to Dutch fighters with M-1 contracts.

Losing investors: During Fedor's reign as the sport's heavyweight king, M-1 Global had some wealthy businessmen it could count on when it needed an infusion of cash. Basically, these were businessmen who were willing to lose money on an investment in M-1 just because they liked being associated with the toughest man in the world. But Fedor no longer has that allure, and as a result those investors have signaled to M-1 that they won't be infusing any more cash in the promotion.

Contract negotiations: For the last couple of years, M-1's negotiating stance has been, essentially, "We've got Fedor, and the only way you can get him is to give in to all of our demands. Take it or leave it." That worked with both Affliction and Strikeforce, because both desperately wanted the man who was generally recognized as the heavyweight champion of mixed martial arts. But now that Fedor isn't at the top of the sport anymore, the "take it or leave it" stance simply won't work. M-1 Global and Fedor had a three-fight contract with Strikeforce, and after the first fight, against Brett Rogers, M-1 went to Strikeforce and demanded some additional concessions before booking the second fight. If Fedor had beaten Werdum, you can bet more concessions would have been made to get Fedor into the third fight of his deal. Now, if anything, it's going to be Strikeforce demanding that M-1 make concessions before a third fight can get booked.