Falling Action: Winners and Losers in the Aftermath of UFC 116 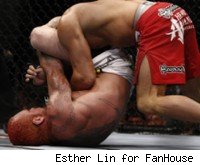 The UFC's July pay-per-view event is quickly becoming the MMA version of a mid-summer classic. Last year it was UFC 100 that took the organization – and, you could argue, the sport – to a whole new level. This year, UFC 116 brought us a slightly less star-studded card, but one that delivered just as many great moments.

They aren't mainstream superstars and they can't headline a pay-per-view on their own. All they do is put on gritty, entertaining fights on a consistent basis, which is exactly what they did on Saturday. For that, they deserve a greater share of the attention, and maybe also a bigger cut of the money. But enough preamble. Now on to the best and worst of UFC 116.


Share I know, I know, you were expecting it to be Brock Lesnar. But Leben's the guy who did something no other UFC fighter has ever done by winning two fights in the span of three weekends. Like Frank Sinatra (and to a lesser extent, Sid Vicious) he also did it his way, turning the fight into the kind of toe-to-toe slobberknocker he's long been known for. Not only did he boost his own stock with the consecutive wins, but he also stacked some serious paper over the last couple weeks. Sounds to me like he earned himself a vacation while he waits for Wanderlei Silva to heal up.

Biggest Loser: Fans who missed this event to spend time with their families
Seriously, what were you thinking? For one, 4th of July is among the best holidays precisely because there's no family element involved. You didn't really need to drive to your in-laws' house and fly to see your sister's new baby. Save that stuff for Thanksgiving. In your foolishness, you missed the best fight card of the year. Honestly, there wasn't a single bad fight (though Grove-Reljic did end the night on a bit of a downer) and no fighter really emerged looking worse for his efforts. It was a great night. But I'm sure your grandmother's house was fun, too.

Best Comeback: Brock Lesnar
So much for the theory that Lesnar is a schoolyard bully who will crumple up and quit the first time he gets punched in the nose. Instead, he's more like a bully who will fall down, wait for you to wear yourself out with emotionally charged punches, then come back to choke you out once you're exhausted. The win still leaves quite a few what-ifs about Lesnar's overall abilities, but at least for the moment he gets to savor the victory.

Most Disturbing Trend: Yoshihiro Akiyama's poor cardio
Akiyama has now had two fights in the UFC, and in both he's started off strong only to fade in the later rounds. He doesn't just slow down, either. He gets exhausted. He starts huffing and puffing like Phil Baroni used to – that kind of overwhelming outward fatigue that makes even the spectators feel like they need to sit down and maybe even vomit. If it happens once, it's forgivable. If it happens twice, it's a pattern.

Most Deserving of a Bonus That He Didn't Get: Chris Lytle
His triangle-armbar combo was not only a more difficult submission to pull off than Lesnar's choke, but he also had to apply it on an opponent who wasn't so exhausted that he could only stare up at the ceiling until it was time to tap. Not to mention, Lesnar went home with millions of dollars anyway. You're telling me he's even going to notice the extra $75,000 for Submission of the Night? It's a drop in the bucket for him, while for Lytle it would have been an entire swimming pool. Perhaps literally. And just in time for summer, too.

Biggest Disappointment: Shane Carwin's first experience with the 2nd round
Maybe we can't blame Carwin for failing to pace himself better when he had Lesnar hurt. He'd never been past one round in his entire pro career before Saturday night. Round two must have seemed like little more than a theory to him, like time travel. Sure, it sounds fun, but the next thing you know you accidentally prevent your grandfather and grandmother from meeting one another and then your legs gets so heavy that you can't stop the takedown. Or something like that.

Most Needed Victory: Stephan Bonnar
Before UFC 116, Bonnar's last win came in October of 2007. George Bush was in the White House, Amy Winehouse's "Rehab" was still a non-ironic hit, and Eric Schafer, who Bonnar beat via TKO, was still in the UFC. It's been a rough go for Bonnar since then (and for Amy Winehouse), but he finally got back in the win column when he stopped Krzysztof Soszynski this weekend. Is it just me, or did his emotional post-fight speech sound eerily similar to a farewell speech?

Most (Hopefully) Empty Retirement Threat: Kurt Pellegrino
He said he'd retire the next time he lost a fight. Against George Sotiropoulos on Saturday night, it seemed like he just ran out of time. Pellegrino's still just 31, and he's 4-1 in his last five fights, so there's no need to call it quits. Unless, of course, he doesn't feel that he has it in him to go on. Let's hope that was more a pre-fight motivating tool than a vow he intends to hold himself to. "Batman" can almost certainly still compete in the UFC's lightweight class, and fans would still like to see him try.

Most Likely to Slam Someone into an Alternate Reality: Gerald Harris
Harris' third-round knockout via cage-rattling slam against Dave Branch earned him a KO of the Night bonus and an appearance on SportsCenter's Top Plays, where his brutal finish was sandwiched between some dudes fielding ground balls. I don't care how hard it is to throw someone out at first, it sure doesn't seem so impressive after seeing Harris slam someone into a state of temporary rigor mortis now does it?