Dan Hardy on Carlos Condit: He Comes to Brawl, and That's What I'm All About 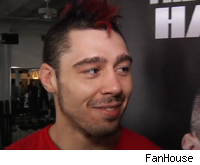 Phase one of Dan Hardy's three-step plan to get back to a UFC welterweight title shot will begin in London at UFC 120, when he battles Carlos Condit.

Though the fight is not yet officially announced, it's been confirmed by several sources, and Hardy himself spoke about the possibility of facing Condit during a recent appearance at UFC 116 in Las Vegas.

"I can't say the name on the contract, but the speculation is Condit," Hardy said with a smile. "He's a real exciting fighter. He comes to brawl and that's what I'm all about."

The 26-year-old Condit, who goes by the "Natural Born Killer" nickname, rallied in his last fight at UFC 115 for a come-from-behind win against 20-year-old phenom Rory MacDonald. Condit trailed after the opening two rounds, but took his game up a notch up in the third, taking MacDonald down and brutalizing him with elbows and short punches to gain a late stoppage win.


Share
Hardy says it's that kind of aggressive attitude that makes Condit a desirable opponent.

"I think it's great," Hardy said. "He doesn't go to decisions. He likes to finish fights. He's got good submissions, good striking, so if that fight comes off, I'll be happy."

Hardy rose quickly through the UFC ranks with four straight victories to earn a title fight opportunity against Georges St. Pierre at UFC 111, but he was handled by GSP en route to a lopsided decision loss.

The affable Brit, who resides in Los Angeles for a large chunk of the year, has spent much of the time since the fight working on his wrestling, after St. Pierre was repeatedly able to put him on his back. St. Pierre was perfect when it came to the wrestling portion of the match, landing all nine of his attempted takedowns.

"I've got a bunch of D-I [wrestling] guys kicking my ass every day, as well as guys with judo backgrounds," Hardy said. "I've learned, if you want to get good at wrestling, you have to go find it."

Apparently, the St. Pierre loss was still a positive when it comes to his Q-rating. Hardy said on a recent trip to Disneyland, he was stopped repeatedly for autographs and pictures, but the most surreal moment came when in-costume characters on the Star Tours ride knew who he was.

"It was pretty weird to have Stormtroopers recognizing me," he said.

Of course Hardy hopes to get even more famous by rebounding from the defeat and some day winning gold. He thinks that three more wins will get him back in the cage fighting for the belt, and that for his first leg of his comeback tour, Condit makes the perfect foil.

"I'm impressed with him," he said. "He's a good fighter, and it'll be a tough fight whichever Carlos shows up."

The charismatic fighter also got off one of the weeke's best lines after a fan asked him about the progress of his wrestling. After explaining it was a long process to improve upon the techniques needed to become a better wrestler, Hardy mentioned that he's always going to fall back upon his best weapons, settling on this: "my favorite takedown is my left hook, my favorite submission is my right hand."