Shane Carwin Says His Body "Seized Up" Against Brock Lesnar 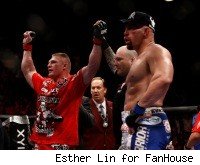 After the start that Shane Carwin got off to at UFC 116 on Saturday night, it almost didn't seem possible for him to lose. He had Brock Lesnar bloodied and hurt, cowering against the fence with his arms covering his face as Carwin kept the punches coming in a steady stream.

Then the stream slowed, and finally came to a stop. When it did, Carwin started to seem as though he'd spent everything he had for a finish that didn't materialize.

"When I had him in trouble the ref keep saying he was going to stop it and then towards the end of the 1st my body began to seize up," Carwin wrote on his official website. "In between rounds I could not move my legs and had what felt like a whole body cramp. My cardio was fine but my body was not. What can you do? You have to stand up and face your opponent."

This might help explain why Carwin was able to offer very little resistance in the second round, having thoroughly exhausted himself in the first frame. According to FightMetric, Carwin landed a total of 61 strikes in the fight – the vast majority of which came in the opening round – compared to a total of just 27 for Lesnar.


Share
When he came out for the second round, it was clear that Carwin didn't have the same pop he'd had in the first.

"Heading into the second I knew I need to finish the fight or I was going to be in trouble," he wrote. "Much like the Champion he is I am sure Brock was thinking the same thing. I had zero take down defense as my legs were dead to me and the rest is as they say history."

Lesnar took Carwin down in the opening minute of round two and met with little resistance as he moved quickly to full mount, securing the arm triangle submission. Just the look on Carwin's face as Lesnar tightened the choke told the entire story. He simply didn't have anything left.

It's hard not to look at the fight and wonder what might have happened if Carwin had paced himself better in the first, perhaps picking his shots a little more carefully rather than inundating Lesnar with constant strikes.

Maybe he was hoping that staying busy would prompt referee Josh Rosenthal to stop the fight sooner, but Rosenthal made the right call by allowing the fight to continue. All the proof you need of that is in the end result. While he might not have offered a ton of intelligent defense in the first frame, Lesnar stayed just active enough and was clearly capable of continuing, as he demonstrated when he rebounded to win the fight in the second.

On his site, Carwin also gave Lesnar credit for conducting himself like a professional in the bout, adding that "he fought like a warrior."

"I am going to have to claw my way back to the top but I wouldn't want it any other way," Carwin wrote. "I know I belong with the very best; all I need to do is prove it again."