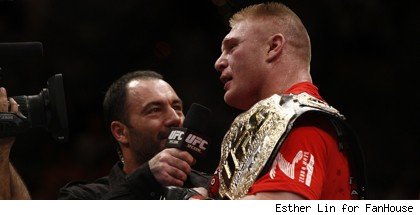 Zuffa's belt already signified the best fighter in every weight class from bantamweight through light heavyweight, and now the two big heavyweight fights of the last two weekends -- Fabricio Werdum's shocking upset over Fedor Emelianenko and Brock Lesnar's comeback win over Shane Carwin -- have resulted in a changing of the guard in the heavyweight division as well.

Lesnar is undeniably the sport's No. 1 heavyweight, but how does the rest of the top 10 shake out? Find out below.

(Editor's note: The individual fighter's ranking the last time we did heavyweights are in parentheses.)

1. Brock Lesnar (2): We saw on Saturday night that Lesnar isn't just a big, strong bully who overpowers his opponents. He's a complete mixed martial artist who can overcome adversity and find a way to win even when the fight doesn't go according to plan. That's why Lesnar is the best heavyweight in the sport.

2. Shane Carwin (3): Who ever thought we'd see Lesnar get dominated the way Carwin dominated him in the first round on Saturday night? I don't think there's any other fighter on earth who could have withstood the kind of punishment Carwin was dishing out against Lesnar. I'd pick Carwin to beat any other heavyweight in the world.

3. Junior dos Santos (6): You could argue that it's too early to have dos Santos this high in the heavyweight rankings. After all, it was only a couple years ago that people thought he was being rushed into his first UFC fight, against Fabricio Werdum, before he was ready. But dos Santos destroyed Werdum, he's destroyed four more opponents in the Octagon since then, and I expect him to destroy Roy Nelson and get a heavyweight title shot some time in early 2011.

4. Fabricio Werdum (9): Traditionally, in combat sports, when you beat the champion you become the champion. And since Werdum beat Fedor – who for several years has been widely recognized as the heavyweight champion of MMA – you could make a case that Werdum deserves to be No. 1. But his loss to dos Santos makes it pretty much impossible to call him No. 1. And, of course, if he hadn't lost to dos Santos he'd still be in the UFC and wouldn't have fought Fedor. So he'll have to settle for being the best heavyweight outside the UFC.

5. Fedor Emelianenko (1): Fedor is still the greatest fighter in the history of the sport, but every great athlete has to decline eventually, and Fedor certainly has. The Fedor who beat Antonio Rodrigo Nogueira in 2003 and 2004 wouldn't have gotten caught in the triangle choke that made Fedor tap to Werdum, but that Fedor doesn't exist anymore. He's still one of the sport's best heavyweights, but he's not the very best, and it's highly unlikely that he ever will be again.

6. Cain Velasquez (5): He's 8-0 and now the UFC's No. 1 contender, and although I thought his stand-up left a lot to be desired when he fought Cheick Kongo last year, he has shown marked improvement in subsequent TKO wins over Ben Rothwell and Antonio Rodrigo Nogueira. He'll be an underdog in his next fight, but he'll have a very good chance of pulling the upset.

7. Alistair Overeem (4): Overeem may be more upset that Werdum beat Fedor than Fedor was. Overeem desperately wanted to be the one to dethrone the Last Emperor, and now that Fedor has lost, the Strikeforce heavyweight champion may be shut out of the promotion's biggest fight as a Fedor-Werdum rematch is looking likely. Overeem remains one of the best heavyweights in the world, both in MMA and in kickboxing, but we don't know when he'll defend his increasingly irrelevant Strikeforce heavyweight title.

8. Frank Mir (7): We don't know when Mir will fight again either, but after previously considering a move down to light heavyweight, he has more recently said he'd like to earn rematches with the last two men to beat him, Lesnar and Carwin.

9. Antonio Rodrigo Nogueira (8): With TKO losses to Mir and Velasquez, it's clear that Nogueira is past his prime. He's still relevant in the division, though, and rematches with either Mir or Mirko Cro Cop would be big draws for the UFC.

10. Brett Rogers (10): Rogers dropped off most Top 10 lists after Overeem destroyed him in May, but I still think he matches up favorably with most of the rest of the heavyweight division, including Antonio Silva, who could face Rogers next.